You may have noticed, dear reader, a theme running through a few news stories about the NJDOE's recently announced charter closures. Small, independent charters are being given the boot, somewhat unceremoniously and precipitously, to make way for what are essentially big box, prefab, chain Charter Management Organizations (CMOs).

Phill Dunn from the Courier Post wrote a great piece about how Camden's City Invincible Charter School turned out to be not so invincible in the face of the CMO onslaught, and John Mooney pointed out a similar dynamic in Newark.

The Christie administration’s policies toward charter schools continued to stir debate this week, as a second school shuttered by the administration in the last month questioned whether it was being punished for – among other things -- not being part of a large charter network.

It was announced this week that the Greater Newark Charter School, opened in 2000 and one of the state’s oldest charter schools, was not approved for its five-year renewal in April, ostensibly due to low achievement levels and a lack of plans to remedy them.

But its director said yesterday that the school is appealing the decision, contending that the state Department of Education did not follow its usual protocol in reviewing the school.

Christopher Pringle, the school’s director, said the school had fallen below set benchmarks in a single area for the first time in its 14 years. He questioned if the state was favoring schools that were part of large charter networks over the smaller independent schools.
(emphasis mine)


The executive director of the state’s charter school association said the issues point to the changing face of the charter movement in New Jersey.

“New Jersey has had a unique history, in that in most other states, there has been more a mix, while in New Jersey, there were very fewer (charter management organizations),” said Carlos Perez of the New Jersey Charter Schools Association.

“Now, that’s changing, and while it may seem like major growth, it’s really us just catching up with other states.”

Perez said he hopes that the smaller, independent charters will continue to thrive.

“They have been the life-blood of the movement,” he said. “And after all, the big organizations all started as smaller ones in the beginning.” (emphasis mine)

While Perez may "hope" the mom and pop charters of yesteryear live on in New Jersey, if I were him I wouldn't hold my breath. And I disagree that the growth of CMOs in New Jersey is "really us just catching up" with the rest of the country.

There is a well connected, well funded effort underway, and it seems that not even a change in Commissioner can stop the train that Cerf and his cronies have set in motion.

Remember way back in December of 2012, when I wrote about the One Million Lives campaign?

In case you missed it, here is all you really need to know summed up in a single sentence from the One Million Lives press release.

You don't have to read too far behind the rhetoric to figure out that the ultimate goal is to close a bunch of "failing" (read small independent) charters in order to open a whole bunch of "good" (read big CMO) charters.

Who spearheaded the One Million Lives campaign, you may ask? Why, that would be none other than ex Commissioner Cerf, and his pal Greg Richmond, President and CEO of the National Association of Charter School Authorizers (NACSA).

You see New Jersey, these guys are much smarter than you. You may have been sold on the idea of charters as small laboratories of innovation, but Cerf and Richmond have much, much different ideas.

And their ideas are about to come to life in New Jersey, with a little help from people with much, much more money than you'll ever see if your lifetime.

It is going to take some minds much greater than mine to figure this out completely, but let's get the story rolling while I look for some clever people who understand finance and numbers to help me completely unpack this.

Here's what I know so far.

The Charter School Growth Fund (CSGF) is all about expanding CMOs across the country.

The Charter School Growth Fund (“CSGF”) is a non-profit fund working to transform K-12 education by investing in innovative charter school networks that offer outstanding educational options for under-served students. Founded in 2005, our mission is to invest philanthropic capital in the nation’s highest performing charter school operators to dramatically expand their impact on low-income and minority students. We provide financing, business planning support, coaching and other resources that portfolio members require to build networks of high-performing schools. (emphasis mine)

I don't know about you, but I'm stuck on the word invest. This is from the CSGF website, under "Why Invest?".

CMOs have demonstrated the ability to scale effective school models in a way that is unprecedented in U.S. education. During the scale-up phase, however, philanthropic investment in CMOs addresses a critical financing need. It addresses the central operating deficit between when a CMO staffs up to undertake an expansion campaign and when the central office breaks even on management fees from schools in the network.  This philanthropic contribution is temporary, however, because management fees come out of public revenues — an income stream that should sustain network operations at full scale. (emphasis mine)

Somewhere in this spiel about "market share" and "expansion campaigns" lies the fact that CSGF gives CMOs a leg up over the little guys when they "invest in the scale up of 40 to 45 of the highest performing and most promising CMOs across the country."

So who has heeded the call and invested in CSGF?

All the folks you'd assume - Broad, Gates, Walton and a whole host of others (click the link above - the list is extensive).

There are loans from Broad and Gates that are also accruing interest.

There is some serious money flowing through the CSGF.


It should come as no surprise that CSGF and NACSA have teamed up to directly lobby legislatures in states like New Jersey to expand CMOs and close "failing" (again, read small, independent) charters. Here you can read their full, joint report, titled “Replicating Quality: Policy Recommendations to Support the Replication and Growth of High-Performing Charter Schools and Networks”.

From the press release:


State policies must change to differentiate and grow high-performing charter schools and weed out the low performers according to a report released today by the National Association of Charter School Authorizers (NACSA) and the Charter School Growth Fund (CSGF). (emphasis mine)

It looks like City Invincible and Greater Newark have been "weeded out" to make way for bigger, better CMOs.

If legislators have any doubts that NACSA and CSGF are indeed right, and bigger IS better, Stanford University’s Center for Research on Education Outcomes (CREDO) has written up a study which conveniently concludes that CMOs receiving CSGF money are the best and the brightest! (I've written about CREDOs credibility problems here, here and here.)

Few observable attributes of CMOs provide reliable signals of performance. We sought to identify attributes of CMOs that were associated with the overall quality of their portfolio. For the most part, most of the factors we examined had no value as external signals of CMO performance. Specifically, there is no evidence to suggest that maturity, size (by either number of schools or total enrollment) or the spatial proximity of the schools in the network have any significant relationship to the overall quality of the CMO portfolio. Operating in multiple states dampened a SMO's results on average. One bright signal was found in having a CMO be the recipient of a Charter School Growth Fund; those CMOs that were supported by the Charter School Growth Fund had significantly higher learning gains than other CMOs or independent charter schools.(emphasis mine)

Well, there you have it! CREDO says they can't really put their finger on anything in particular that makes a CMO better than an independent charter, but if the CSGF dumps a bunch of money in they perform better than other CMOs or mom and pop charters.


So let's take a look at the CMOs that are moving and shaking in New Jersey.

Uncommon Schools, which runs the 9 North Star Academy charters in Newark, (as well as charters in Boston, New York City, Rochester and Troy, NY) has some pretty big plans for Camden.

Uncommon has proposed to launch 5 schools in Camden, ultimately serving grades K-12 and beginning with one elementary school serving Kindergarten in Fall 2014.

TEAM, currently a network of 6 KIPP schools in Newark, is looking to open 5 charters in Camden as well. 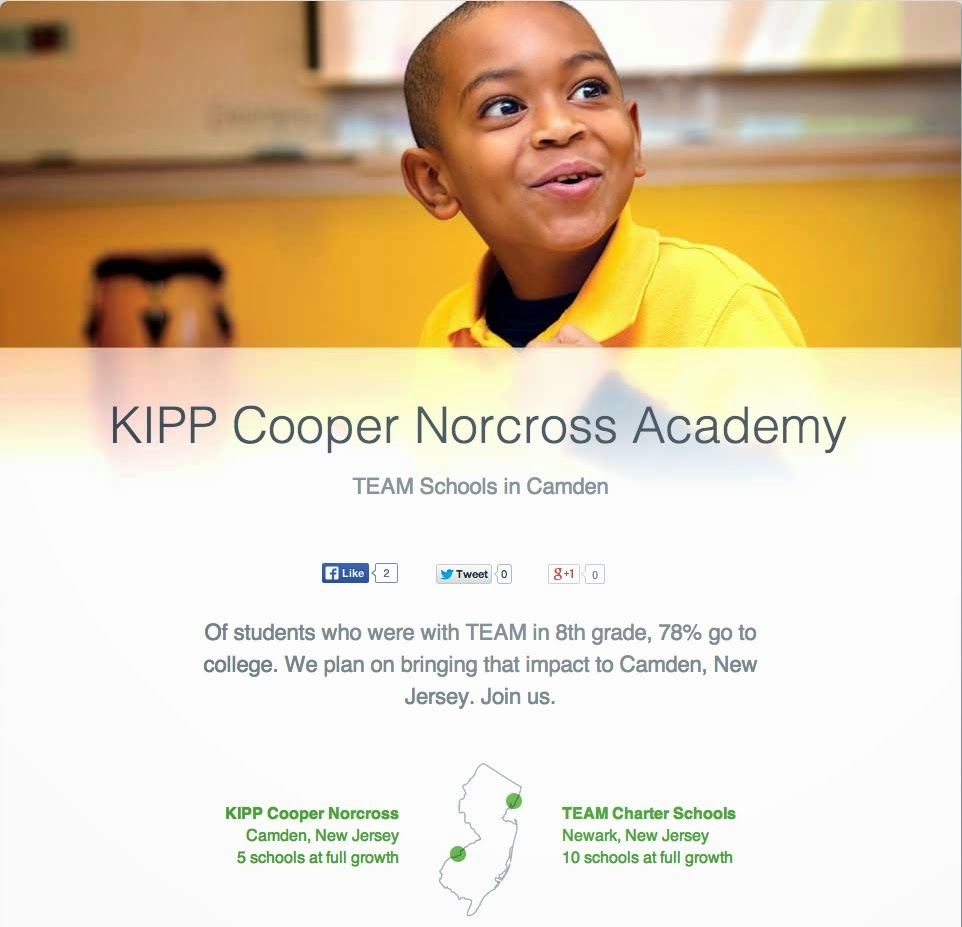 Not only are networks like Uncommon and TEAM spreading from Newark to Camden, but other CMOs are crossing state lines to set up shop in New Jersey.

Philadelphia's Mastery Charter Schools is coming to Camden, too.

Ascend Learning is coming to Paterson from Brooklyn.

And then there is Touchstone Education. Initially approved to open charters in Newark and Trenton, Touchstone opened only Merit Prep Newark in September of 2012. Before they have even proven themselves they have asked the state for another location in Newark.

What, if anything, do the CMOs that are spreading like a virus have in common?

You guessed it. CSGF is "investing" in each and every one of them.

In 2013, CSGF made a second investment in Uncommon Schools to support the growth of 11 schools and USI’s creation of 4,493 new seats. USI will eventually have 45 schools serving over 18,000 students.

At full capacity in 2013, five TEAM schools will form a full pre-K–12 system serving more than 2,200 students or over five percent of Newark public school students.

Ascend plans on growing from six schools today to 17 schools in 2018, when the network will serve 8,500 students.

During the first phase of Touchstone’s growth, it plans to launch six schools in New Jersey that will ultimately create over 3,600 new seats of student capacity in blended learning secondary schools. Touchstone hopes to develop the next evolution of the “no excuses” school, where students’ progress on unique learning paths based on their specific needs with the expectation that all students exit prepared for college.

Protected From Up On High


Seems pretty clear, that if your CMO has been anointed by the CSGF and their myriad investors, your schools not only have a better chance of surviving, but of attaining and maintaining "market share" in one or more cities.

Over the coming weeks and months I will be following the rise (and fall) of some of these CMOs gaining traction in New Jersey, and I will be looking more in depth at CSGF and their sphere of influence.