My Kid Is Just Fine Thanks, She's Refusing The Test 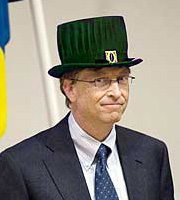 Rejoice, New Jersey! Spring is almost here! That magical time of year when the flowers bloom, the sun sets later, and the temperatures rise. But for public school children, it's also state-mandated testing time. That dreaded time of year when their vibrant schools wither into testing factories, the school day can't end fast enough, and parents, politicians, and pundits get hot under the collar debating the value of PARCC.

Everyone please give a resounding welcome to How Is My Kid Doing! These Gates funded Common Core astroturf cheerleaders, are doing a bang up job of setting all us misinformed parents straight!

Why, just watch their teaser video!

From Carla, part of the How Is My Kid Doing team:


The love and the anxiety we have over these little beings. It makes you put blinders on, you know? I mean, people could say to me, if you wear a green hat on Mondays, Wednesdays, and Fridays, your kid will be spared from X, Y, and Z. I'd be like, OK, put on the green hat, as silly as it makes me look, I'll do it!

This may be the most preposterous pro-testing argument ever to be uttered, let alone recorded and promoted.

Imagine Bill Gates's disappointment that this is best the Council for a Strong America could do with the $2.2 million he gave them to "educate and engage stakeholders about the Common Core." Here's how they describe their campaign:


How is My Kid Doing is an interactive video project that creates a parent-to-parent dialogue on the issue of well-designed, limited testing to measure and assess our children’s readiness for real life. The project talks with parents from across the country and discusses challenges and growth experienced as a result of testing.
Common rules and ways to measure results help businesses, the military, and sports teams compete. Young Americans, no matter where they live, deserve the best preparation possible for their future success in college and the workforce.

If "common rules" are effective in business, the military, and in sports, then naturally they should be highly effective in a Kindergarten classroom, amiright? I mean, who wouldn't want their 5 year old shaped in the environmental conditions found on Wall Street, the battle ground, and the gridiron?

A friendly little word of advice to Bill Gates, and his army of propaganda pushers.

The parents I know who refuse the tests do not have blinders on. They won't just put on a green hat because Bill Gates thinks it's good for their kid. They research. They think critically. They are not prone to follow someone else's lead. They are independent parents who want full, rich experiences for their own children, and for all children.

In other words, they are the people that will tell Bill Gates where he can shove his green hat.

If you want to hear authentic parent voices, hop on over to the Save Our Schools NJ Facebook page, where they have just launched their own campaign to raise the voices of informed parents across the state who refuse the test for their kids. The first refusal story is from a mom in Jersey City who was so disheartened by the joyless Kindergarten environment in her child's school, she made the decision to home school - the ultimate refusal.

Real parents explain why they oppose high stakes standardized testing. Check out our Q and A and other refusal resources at: http://www.saveourschoolsnj.org/refusing-parcc-test/
Posted by Save Our Schools New Jersey on Wednesday, March 2, 2016

To hear from more independent parents across the state, stay tuned to the Save Our Schools NJ Facebook page. If you'd like to submit your own story, send them a Facebook message with your name, a photo and a 100 word statement on why you refuse the tests.

The best antidote to Bill Gates and his minions is informed, engaged parents who aren't afraid to tell their story. More and more parents are waking up to the fact that education is so much more than what can be measured or standardized, and we refuse to let state and federal demands for accountability squeeze the joy and love of learning out of our children.

ADDING: Aw, ain't that sweet! The Gates Foundation is really proud of their astroturf project about the "value of testing"!

Meet Ben, Shawna, Cheryl, and other parents in new video series on the value of testing, via @HowisMyKid: https://t.co/IdPP1nvk8o
— Gates Education (@gatesed) March 1, 2016