It seems that NJPTA President elect and We Raise NJ spokeswoman Rose Acerra needs to do her homework on the graduation requirement issue.

“We believe in high-quality standards, as well as assessments that align to those standards. And we believe that every high school senior in the state of New Jersey should take a high-quality assessment to demonstrate college and career readiness,” said Rose Acerra, president-elect of the New York PTA. “That is the best way to determine if they are prepared for the next step that awaits them, be it a classroom or a boardroom.” (emphasis mine)

Note to Acerra and We Raise NJ: High school seniors don't take exit exams. According to existing state statute, students are required to take an exit exam in the 11th grade:


In the school year which begins in September 1993, and annually thereafter, the State graduation proficiency test shall be administered to all 11th grade pupils and to any 11th or 12th grade pupil who has previously failed to demonstrate mastery of State graduation proficiency standards on said test. The mastery of proficiencies required to fulfill local graduation standards shall be determined as appropriate under local board of education assessment plans. (emphasis mine)

The only 12th grade students taking exit exams are those students that did not pass the 11th grade administration.

Her comments make me wonder if Acerra even understands that the proposed regulations make PARCC Alg 1 and ELA 10 the state's exit exams. And does she understand, for instance, that many students take Algebra 1 in middle school? 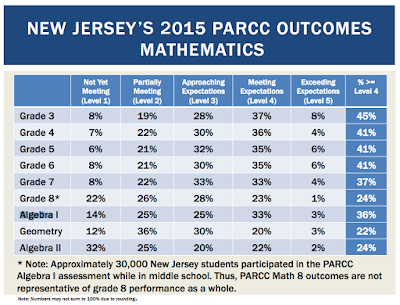 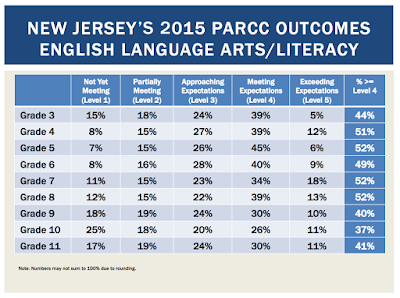 The state is proposing that schools must pressure middle schoolers and 10th graders (because remember, as of 2020 there will be no opting out) into taking tests with 36% - 37% pass rates to prove they are both "college and career ready" and ready to graduate from high school.

As my friend Jersey Jazzman says, is everybody OK with that? Because to my mind, this proposal only makes sense if you want to set kids and schools up to fail.

And while Acerra's well rehearsed talking point that the NJ PTA believes in "high-quality standards, as well as assessments that align to those standards," in reality that has nothing to do with the state statute as it relates to graduation exit exams.

In fact, here's what the state statute actually says:


The test shall measure those basic skills all students must possess to function politically, economically and socially in a democratic society. (emphasis mine)

Did you catch that? The legislature asked the NJDOE to create a test of basic skills. PARCC is not a basic skills test. Does PARCC include basic skills? Probably. Is it limited to basic skills? Most certainly not.

Shoutout to the brilliant Sarah Tepper Blaine for scouring state statute and making these arguments before the New Jersey State Board of Education yesterday. Her fabulous testimony is posted on her blog.

Sarah made it crystal clear that the NJDOE has completely overstepped their authority with the proposed graduation requirement regulations they're asking the state board to adopt.


However, the school laws you’re tasked with enacting and enabling only allow you to deny high school diplomas to students who don’t demonstrate the minimum basic skills in reading, writing, and computational skills necessary to function politically, socially, and economically in a democratic society.  What the statutes expressly do not allow you to do is to unilaterally raise that minimum and instead require students to meet a much higher threshold – college and career readiness – in order to obtain a high school diploma. (emphasis mine)

You guys may be clever enough to make it look like parents are on board with the NJDOE's proposed changes to graduation requirements by putting the NJPTA out in front on this one, but you don't have parent advocates Sarah.

You only have the NJPTA, and they lost the ability to represent the interests of parents the minute the national organization started taking millions of dollars from Bill Gates "to educate parents and communities on the Common Core State Standards."

That's when they stopped talking with parents and started talking to them.

And while those millions may get Gates a seat at the table in NJ in the form of some made-up coalition of parents and the business community (natural allies, right?), all that money can't buy him passion, commitment and determination.


Susan Cauldwell, executive director of SOSNJ Community Organizing, also endorsed the legislative approach during the press conference, but held out the possibility of a grassroots campaign against PARCC that extends into 2017 and beyond.

We won’t be discouraged in this fight,” she said. “Parents have attended countless public hearings, countless legislative hearings, they’ve written editorials, they’ve blogged, they’ve posted on Facebook. We’re not going away, so if it’s not this governor and this DOE, there’s an election coming, and it will be the next governor and the next DOE. We have the numbers, and change will be coming soon.”

So while We Raise NJ was sending out their crisp press release, SOSNJ, ELC, NJEA and dozens of parents, teachers and students were outside the NJDOE stating our case. We were wet, and we were cold, but we were there to show the powers that be that no single test should be used to decide if a student is eligible to graduate. Especially not a flawed, unreliable, unvalidated instrument such as PARCC - a test that was not designed or intended for this purpose.

And like Susan said, we're not going away and change will be coming soon. 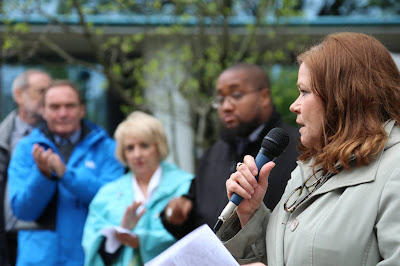 Posted by Mother Crusader at 11:29 AM 1 comments

The shine is off of Chris Christie for sure.


Once the golden boy of the Republican Party, the New Jersey governor failed to poll out of the single digits in the primaries, and has been the subject or scorn and ridicule since returning to the Garden State defeated and opportunistically endorsing Donald Drumpf for President. There is speculation that he could be rewarded by being selected to be Drumpf's VP.  Anything to stay relevant, I guess

Christie's favorability rating at home hit an all time low after the Drumpf endorsement, and residents expressed sincere concern for the future of the state under his leadership.

Prior to endorsing Drumpf, Christie held a 33 percent approval rating. In the days after his surprise announcement last week, that rating dropped to 27 percent.

The survey also found a record low number of New Jerseyans, 29 percent, are confident the state is headed down the right track. Fifty-nine percent expressed concern the state is "headed off the rails," according to the poll.

The Fairleigh Dickinson University poll also asked respondents to describe the Governor in one word. Here is the word cloud created based on those answers.

Not a big surprise that Christie is viewed as an arrogant bully, or that very few positive sentiments rise to the surface. This just confirms that Christie is persona non grata in the state, and we're all just biding our time until he's gone.

Our state held hostage by an arrogant bully.

So who would want to welcome Christie into their midst? Why, the New Jersey Charter Schools Association, of course!

I could barely stifle the laughter when I read the glowing email I received from NJCSA this morning:

We are delighted to welcome Governor Chris Christie as the Keynote Speaker for the 8th Annual New Jersey Charter Schools Conference on Thursday, May 26 at 1 PM at Bally's Atlantic City.

Since taking office in 2010, Governor Christie has made education reform a top priority of his Administration, working to turn around failing schools, improve accountability, create a fair and meaningful evaluation system for teachers and principals and increase school choice in the state’s worst performing districts. Governor Christie provided billions of dollars in additional state aid for New Jersey schools, setting a historic high for school funding for five consecutive years.

Leaving all of the inaccuracies in this statement aside for the moment, why would the NJCSA be "delighted" to welcome a governor who has become so toxic to, well, just about everybody?

Because Christie has promised to increase charter seats before he leaves office, and he's already shown he's prepared to make good on that promise.

But who can actually create those additional seats? Why, that would be Christie appointee David Hepse, the Commissioner of Education. That's right, the Commissioner of Education is the only "decider" in the state as to which charters are opened, closed, renewed, or expanded. So it's not a bad idea to make sure to heap a bunch of praise on the guy who hires or fires the guy responsible for your future growth.

You see how this works, right?

And oh, did I mention that Commissioner of Education David Hespe was the NJCSA Keynote Speaker last year?

I just wake up and I say, "How can I help these dedicated folks do better?" And, by the way, whenever you think of a way you can do better, let me know. I'm there. I'll support you in whatever possible way I can.

If you need me, you know where to find me.


The level of fawning is nothing short of shocking.

The governor announced in his 2016 State of the State address that he intended to increase charter seats by 9% before leaving office, thus creating an additional 4,000 seats.

What has naturally followed is increased numbers of applications. Currently 26 prospective charter applicants are hoping to get the nod from Commissioner Hespe. This comes right on the heels of 16 approved expansion requests and three new charter schools approved in late February.

NJCSA has not been shy about the fact that they have gotten the green light from the administration to open the flood gates, and it seems that they have sent that message loud and clear to current and prospective charter operators.

Consider this from Red Bank.

Flanked by Trenton lobbyists and a pair of ex-superintendents-turned-consultants, charter Principal Meredith Pennotti said one key reason the school is seeking to expand is “the political climate” — specifically, Governor Chris Christie’s unabashed support of school choice.
“Did you hear him underscore charter schools?” in his state of the state address last week, Pennotti asked the audience. With two years left in his second term as governor, and perhaps less if his quest for the presidency leads to an early departure, “we’re taking advantage of that opportunity,” she said.
Christie mentioned charter schools 19 times in the speech, and called them “a resounding success for our state.”
“In two years, when he’s gone, this opportunity may not exist,” said New Jersey Charter Schools Association president Nicole Cole, “That’s a pretty critical piece. The time is now for your good schools to be looking at growing seats.”

And this from Pennsauken.

As Save Our Schools NJ so rightly pointed out:


Imagine if the Environmental Protection Agency began encouraging the coal power plants it regulates to expand and open in new locations?


Of course, the funding for those charter schools comes from local property taxes and local public schools - even though the local population has nothing to say about whether those schools may open in their community. That decision is entirely up to the Commissioner of Education - a political appointee of the Christie Administration.


There is no doubt that there is a concerted effort underway, by Christie, Hespe and NJCSA, to increase charter schools seats across the state. While I'm not surprised in the slightest that they're working together to create more charter seats, I would think they'd want to be a bit more subtle about it.

It sure seems like a risky move to glorify Christie as the patron saint of your movement at a time when the vast majority of the state sees him for the arrogant bully he is.