The following is a guest post from four incredible public school activists from Montclair, New Jersey; Lynn Fedele, Michelle Fine, Christine McGoey and Regina Tuma. They are members of the community group Montclair Cares About Schools, also know as MCAS. MCAS has inspired dozens of similar "Cares" groups across New Jersey, including one here in Highland Park.
MCAS is now actively involved in working to inform the public not only about the problems with the application for a French Immersion charter in Montclair, but how their experience illustrates major flaws in the state's charter school program.
My hat is off to them for their tireless advocacy work on behalf of all children. 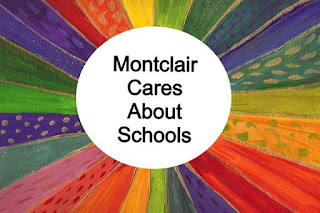 In late March, 2016, public school parents in Montclair, NJ were informed that an application for a French language immersion charter school had been submitted to the New Jersey Department of Education. While the Montclair Board of Education, Town Council and citizen groups quickly objected through letters and calls to the state, the application was approved to move to the second phase.
Now people in Montclair are learning what their neighbors in places like Newark and Paterson already know: when it comes to charter schools, local communities have no choice.

NJ Charter School law puts the decision to grant charter applications solely in the hands of the Commissioner of Education, after review by the charter division. The charter division may take into account community opposition, but communities have no right to make their own decisions about whether charter schools are right for them.
Communities are forced to pay for charter schools, draining dollars for local public schools, even when there is no support or need for them. Adding insult to injury, once the public school dollars are turned over, charter schools have absolutely no accountability to the district tax payers who supply them; no requirements for transparency and no evidence of equity. A charter school can take and take from the local community but does not have to answer to it.
The Fulbright / Montclair Charter School Application is a prime example of how these glaring inequities in NJ Charter law can hold local school districts hostage to educationally unsupportable and unnecessary charter schools overwhelmingly opposed by the community.
In a recent Wall Street Journal article, Brian Murray, a spokesman for the governor, called the NJ charter approval process "rigorous" and asserted that:

This administration will encourage successful charter-school programs wherever the state Department of Education deems appropriate and whenever they can effectively provide parents with an alternative to a failing public school.


In the first instance, communities who are paying for these schools are denied choice, and tax levy dollars are re-routed into corporate hands. Second, even according to Murray’s criteria, the Montclair charter application should have been denied in Phase One. There is no credible way to label Montclair's schools as failing. How then, could a "rigorous process" have allowed the application pass to Phase Two? Under what criteria and by whose judgement did the application move to this second phase?
Nobody outside a select few at the NJ DOE knows, because the so-called "rigorous" process is not transparent to democratic, public scrutiny.
OPRA requests were met with NJ DOE reply that:

The Department does not make or maintain records responsive.


The NJ DOE has only produced heavily redacted invoices for a charter consultant from New York. If indeed the NJ DOE keeps no records of charter application feedback, this is a change in policy, as the state used to provide feedback to applicants on a rubric that was available for public scrutiny through an OPRA request. Apparently, this is no longer the case.  Again we ask, who chooses charters?
The problems inherent in this lack of public transparency from the state are compounded in the face of the strong local opposition to the proposed charter.

To start, the Montclair Board of Education and Superintendent Ronald Bolandi have opposed the charter on numerous educational grounds. In a letter to state commissioner David Hespe, they state:

Montclair is a racially and economically diverse community, characteristics about which its residents take a great deal of pride… Approval of a charter school will undermine the student diversity for which Montclair is so rightly proud. The application spends a lot of space discussing the achievement gap, but points to no evidence-based method for assuring a diverse student body and runs the risk of further segregating Montclair schools.


Charter review is required to attend to fiscal and segregative impacts.
In addition to town officials, a group of college professors have analyzed the application, declaring it a pedagogically unsound hodge-podge of immersion, STEAM, and STEM. They note that Montclair operates under a court desegregation order, but the application asserts the school will be modeled on and recruit in the same ways as Hoboken’s HoLa charter--currently the subject of a lawsuit for increasing segregation.
Their letter delineates a series of concerns, rooted in Charter law:

…the financial consequences of a charter school in Montclair will drain monies from the already theme-based magnet schools.  In addition, we have thoroughly reviewed and are well-versed on the literature regarding the pros and cons of charter schools in general and their adverse impact on curricular offerings and loss of supports for low income students in the host community. In Montclair we care deeply about equity and the needs of struggling students. The Charter would undermine both.


Many have noted the obvious lack of experience in the founders, and questionable judgement in selection of proposed principal. The applicants--a hedge fund employee and former fashion industry employee--have no background in education. The named principal for the school has been accused of financial mismanagement, when she reportedly "spent like a kid in a candy store" on doughnuts and lunches while running a NY charter.
Even the local police have voiced concerns. The proposed site for the Montclair charter has been the recent subject of a town health and safety meeting where  everyone from the emergency manager to the police lieutenant in charge of traffic and the fire chief have found the site unsuitable. It is no surprise that Montclair has come out united and in force against this charter application
The Montclair BOE, Mayor R. Jackson, the Town Counsel, the local NAACP, PTA, Montclair Cares About Schools, Montclair Fund for Educational Excellence, the Montclair 250, the Montclair Civil Rights Commission, Montclair Kids First, The Montclair Times, The Montclair Community Pre-K, Montclair Residents Opposed to Fulbright/Montclair Charter, and individual citizens have all registered written opposition with the state, supported by Montclair's State Senator Nia Gill, and Assemblyman Thomas Giblin and Assemblywoman Sheila Oliver.
Aware of the ability of charters to draw from neighboring towns, Glen Ridge, and Bloomfield Boards of Education are opposing the charter as well as parent groups from Verona and South-Orange Maplewood. And thousands of individual parents and community members have sent letters of opposition.
For some of these same reasons, and because charter schools are speeding up the rapid racial re-segregation of schools and over-disciplining of African American children across the US, Journey for Justice, the Movement for Black Lives (a coalition of 50 groups organized by Black Lives Matter), and the national NAACP have initiated a call for a moratorium on charters, and have been recently joined in the by the Democratic Party in MA.
Charter applications and applicants should not be favored under law over the local districts and citizens who have to support them. That the state continues to consider the approval of a pedagogically unsound charter school that local tax dollars would have to fund, despite public opposition and in a hidden procedure that includes no democratic processes for local taxpayers and citizens, reveals just how flawed the system for charter school approval is in the state of New Jersey.
In a town known for rich debate, dissent, and dialogue, Montclair has surprisingly spoken in a single voice: We reject this charter. This unified opposition then begs the question: How can charter schools present any choice when the community has no voice and the state has no transparency or accountability to the public it is supposed to serve?

The Montclair Board of Education is holding a rally to celebrate the Montclair Public Schools and to protest the proposed charter on Wednesday, September 14th at the Montclair High School Ampitheater from 4:30 to 6:00 pm. State Senator Nia Gill will be the Keynote Speaker with expected political representatives to be in attendance including State Assemblywoman Sheila Oliver, State Assemblyman Thomas Giblin, Freeholder Brendan Gill, Mayor Robert Jackson, Montclair Town Council and others. 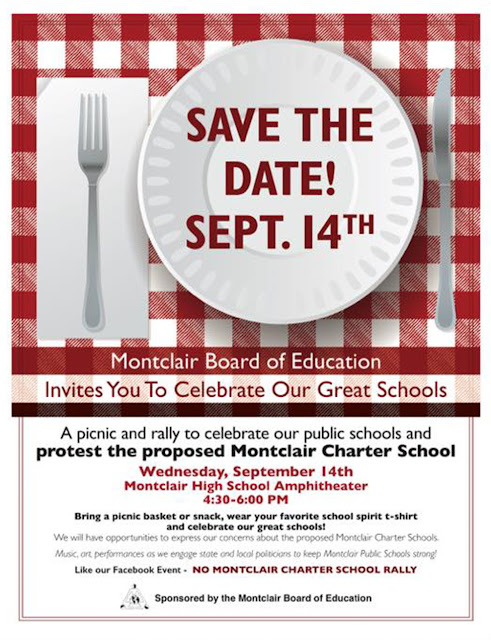