Camden Voucher Advocate, Member Of Groups With Ties To Betsy DeVos, Nominated For NJ State Board Of Ed

You've got to hand it to Chris Christie. He'll always keep you on your toes.

As reported in NJ Spotlight yesterday, the Governor announced nominees for long vacant seats on the State Board of Education yesterday, and in a move no one saw coming, he ousted the Board's President, Mark Biedron. John Mooney also noted one particular nomination, and what it may mean.


Christie added to the board well-known Camden activist Angel Cordero. A former mayoral candidate from the city, Cordero a few years ago was among the state’s biggest advocates for private-school vouchers, a topic that may see a revival in Christie’s last year.

A look at Cordero's Twitter account is, well, disturbing. His handle is @Christie_Guy_. The bulk of his tweets fall into three categories; love letters to Christie, hatred for the teachers' union, and more than a few that are just straight up bizarre.

Here are some representative samples.

Let's start with the straight up bizarre ones to give you a sense of the guy Governor Christie thinks should get to vote on the future of our state's public schools.


You can't get anything past the Gov. As President he's not going to allow the American people's pockets to be picked pic.twitter.com/XhUHgf1dwJ
— Angel Cordero Camden (@Christie_Guy_) August 20, 2015


From here the bizarre melts into hatred for the teachers' union.


USA is in a crisis the teacher's Union destroying the minds of children in Urban cities and radical Muslims at war pic.twitter.com/yCQ8Qq9ywT
— Angel Cordero Camden (@Christie_Guy_) August 12, 2015

Gov Christie said he like to punch the teacher's union who are responsible for the destruction of back and brown kids pic.twitter.com/54qcBlsqGL
— Angel Cordero Camden (@Christie_Guy_) August 5, 2015


And then there are countless tweets of pure, unadulterated love for the man himself.

Christie the only one that can fix the house behind me keep this country safe n stop poverty in this country is you pic.twitter.com/5edsZd8hXQ
— Angel Cordero Camden (@Christie_Guy_) August 7, 2015

Looking forward to August 4th to be with the greatest human being I have ever met, Governor Christie. pic.twitter.com/trSMmH1nX3
— Angel Cordero Camden (@Christie_Guy_) July 26, 2015

A great Man with a heart of Gold our next President Governor Chris Christie. the right path to recovery pic.twitter.com/oXAHpieGYd
— Angel Cordero Camden (@Christie_Guy_) August 11, 2015


Greatest human being he's ever met? A great man with a heart of gold? 82% of New Jersey residents disagree, as Christie's approval level just hit an all time low of 18%.

But back to Cordero. He's on the Board of Delegates of the Latino Leadership Alliance of New Jersey. In 2011, during Christie's strongest push for the Opportunity Scholarship Act, then LLANJ President Martin Perez was a strong supporter.


In this post-election period, the Legislature has a chance to make a real difference in the lives of thousands of students shackled to low-performing schools. It’s a chance that leaders genuinely concerned about the future cannot afford to let slip by. The Opportunity Scholarship Act (OSA) is ready for the final few steps of the legislative process and could be on Gov. Chris Christie’s desk by the end of the month if lawmakers do what they know is right for their constituents.

In 2012 Perez and his wife, Patricia Bombelyn, were behind Vargas v. Camden Board of Education, a lawsuit that sought to free parents from the "failing" schools in Camden and pay them to go to the private school of their choice.

And Angel was right at their side.


One of those advocates is Patricia Bombelyn, the New Brunswick attorney who led the Crawford case and has been closely aligned with Excellent Education for Everyone (E3), the decade-old group that has largely led the push for private school vouchers in the state. E3 is helping sponsor the challenge.

Her law partner, Martin Perez, was also in attendance. Perez heads up the Latino Leadership Alliance. Also present: Angel Cordero, a Camden activist and former mayoral candidate, and former U.S. Rep. Richard Zimmer, a member of the E3 board.

So it crystal clear that Cordero has been at the heart of the movement to bring vouchers to NJ, and it is likely that Christie is rewarding him for his allegiance with this seat on the State Board of Education. But Cordero must have some other qualifications, right?


Cordero by darciecimarusti on Scribd

It's hard to know where to start with this resume. The only experience offered, other than his work with the LLANJ and NJ reform heavyweight E3, is the Community Education Resource Network (CERN) and East Side Preparatory High School. I can find no reference to East Side anywhere other than in this Scribd document which was posted by "The CERN Program." Cordero describes his role at East Side as "Co-founder/general stuff."

No, certainly not the CERN. Cordero's CERN has been described as an "an alternative school for dropouts" in Camden. And while this is certainly a laudable endeavor, it is clear that Cordero has used the school as a political tool to pass voucher legislation. Cordero wants public money to fund his school when, as seen in this highly produced video of CERN's 2014 graduation (created by NJ Public School Options no less), their graduations are held in a church.

And this NJ.com article about CERN's 2011 graduation makes it very clear that the ceremony was little more than a political rally (again, at a church) with the Governor himself in attendance.


Politicians urged audience members to call lawmakers, school officials praised the program’s virtues and workers at the door handed out bright yellow T-shirts saying "one failing school is one too many."

"They said everyone had to wear a shirt," said Charles Washington, 24, of Pennsauken. "You couldn’t get in without a shirt."

Some of the state’s most powerful people attended the ceremony for the approximately 100 graduates of the Community Education Resource Network, an alternative school for dropouts. It also showcased the alliance — at least when it comes to education — between Gov. Chris Christie, a Republican, and George Norcross, a Democratic power broker from South Jersey. Both are pushing the scholarship measure, which has stalled in the Legislature despite the support of Democrats and Republicans alike.

Just imagine a public school handing out mandatory t-shirts at graduation, with pleas for attendees to call their legislators to support public education. Something like that might inspire Christie to accuse the teachers' union of using students as drug mules...

Cordero has absolutely zero experience in or around a public school. While his dedication to the people of Camden is commendable, his push for vouchers, and his willingness to use the students and families he serves as pawns in his political game, is highly suspect.

And his connections to organizations like E3 and LLANJ are deeply troubling.


How in the world does Betsy DeVos come into this?

Back in 2013 I was concerned about a candidate running for the New Brunswick Board of Education. He too was a voucher supporter, and an ally of Patricia Bombelyn and Martin Perez. When I looked into the money behind these vouchers champions, I found DeVos.

At the time, I had no idea who she was.

And in case you're thinking Bombelyn and Perez's connections stop at the NJ border, you're wrong. When Bombelyn and Arocho ran on the same ticket, their campaign received a $2,600 donation from the "New Jersey Federation for Children PAC." 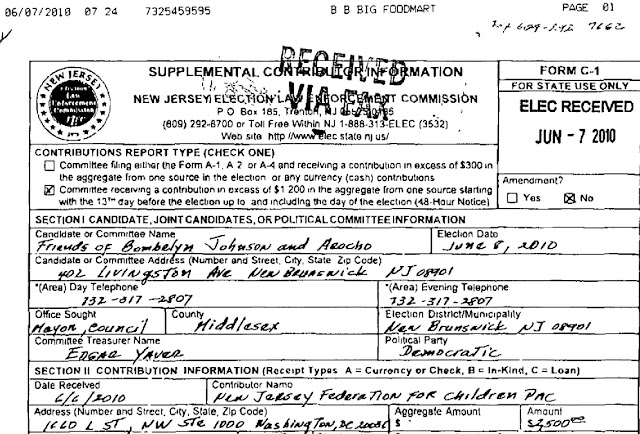 
...American Federation for Children (AFC), the powerful national network of billionaire campaign contributors that has been pouring millions into school privatization fights across the country.

Organized by Michigan billionaires Dick and Betsy DeVos, Americans for Children is officially nonpartisan. But Dick DeVos is a former Republican nominee for governor of Michigan and Betsy DeVos is a former chair of the Michigan Republican Party. Together, they have poured tens of millions of dollars into the ideological and electoral infrastructure that supports school privatization.

“Dick DeVos has used his family’s fortune and status to create an intricate national network of nonprofits, political action committees and federal groups known as 527s that effectively fund the political arm of the school voucher movement,” notes a People for the American Way study of the political projects of the heir to the Amway fortune and his wife. “Nowhere is the impact of the DeVos family fortune greater, though, than in the movement to privatize public education.”

AFC chair Betsy DeVos has for decades been a high-stakes political player on behalf of school privatization. (emphasis mine) 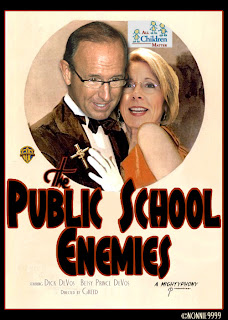 Angel Cordero may have been nominated for a seat on the New Jersey State Board of Education but he has not yet been confirmed by the Senate (See page 6 in the link for current status of his nomination). He has absolutely no experience in public education, and is clearly hostile to the teachers' union. His appointment by one of the least popular Governor's in New Jersey's history must be challenged.

Appointments to the State Board of Education are for 6 years, and there are no minimum requirements to serve, other than those that relate to the make-up of the Board as a whole.

So left to his own judgement, this is who Governor Christie nominates. But there is a process that must be allowed to unfold. This is a nomination, not an appointment. As noted in the NJ Spotlight piece above:

All the appointments require Senate approval, and the nominations this week only start the process of vetting and interviews before the Senate Judiciary Committee. Nevertheless, it is rare when a nomination to a state board is reversed.

It may be rare for a nomination to be reversed, but Cordero is an unusual nominee, to be sure. If ever there was a time for the Senate to intervene, this is it.
Posted by Mother Crusader at 12:10 PM 3 comments