I've written posts here, here, here and here about the unprecedented amounts of Wall Street cash that gushed into the Shavar Jeffries campaign in the last months of the Newark mayoral race. Scholastic Education Blogger Alexander Russo took to his blog and to twitter yesterday to ask how much the union spent to support Baraka.

I had certainly thought that I should take this on as well, to show both sides of the story, so this was just the goading I needed.

What did I find, you may ask?

First, let's total up the Wall Street contributions to Jeffries according to the most up to date Election Law Enforcement Commission (ELEC) filings.

As I reported the night of Baraka's victory, in the weeks leading up to the campaign Education Reform Now's total donation to Super PAC Newark First had swelled to $3,050,000, and Bloomberg had kicked in an additional $400,000 all on his own.

I had reported previously that other Wall Street types, such as Morgan Stanley's John Mack, had contributed another total of $198,000, which brought the Newark First Super PAC amount, just from the ed reform/hedge fund crowd, to $3,648,000.

But wait, we're still not done.

Last night I went through the direct contributions to Jeffries' campaign since my last post, and amazingly enough, even more money men (and women) have come from all over the country to bestow their gifts upon Newark. 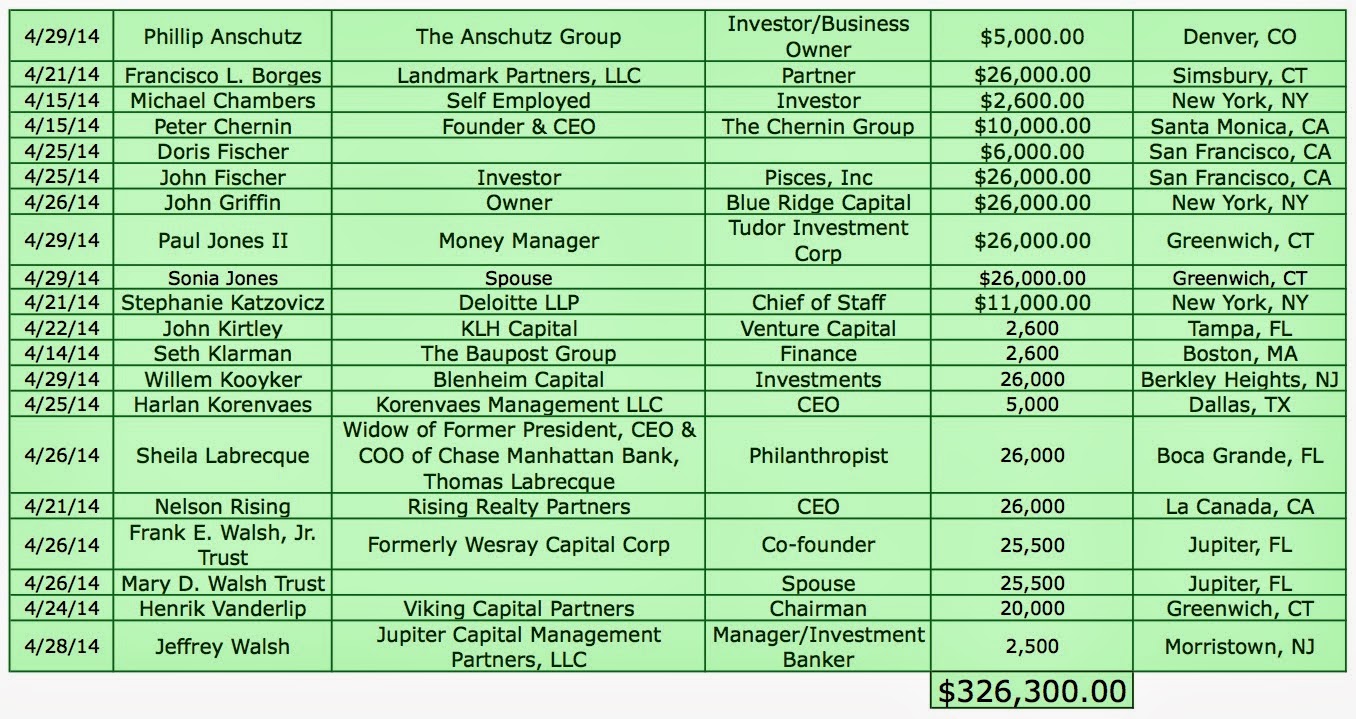 I hate to belabor a point, but once again, not a soul from Newark. Instead, huge donations rolling in from Greenwich, CT; Boca Grande, FL; Denver, CO; and San Francisco, CA.

Oh, and don't miss the first name on the list. Yes, that's Philip Anschutz.  The man who brought you Waiting for Superman and Won't Back Down, was also trying to bring you Shavar Jeffries.

To elect a mayor.

The Union Goldrush for Baraka


This morning I asked Russo how much he thought the union may have contributed to Baraka.

.@MotherCrusader @EduShyster @dalerussakoff AFT wrote a $1M check to help get rid of Fenty... but UFT & NJEA much stronger. Even?
— alexanderrusso (@alexanderrusso) May 16, 2014

Wish I had put money on this with Russo, because I'd finally be able to say I made some money blogging!

I've scoured the ELEC reports, and I can't come up with anything even remotely close to the money spent on Jeffries.

Here's the union money donated directly to his campaign. I added in PAC money too, because quite honestly, the number was so low it was kind of embarrassing. 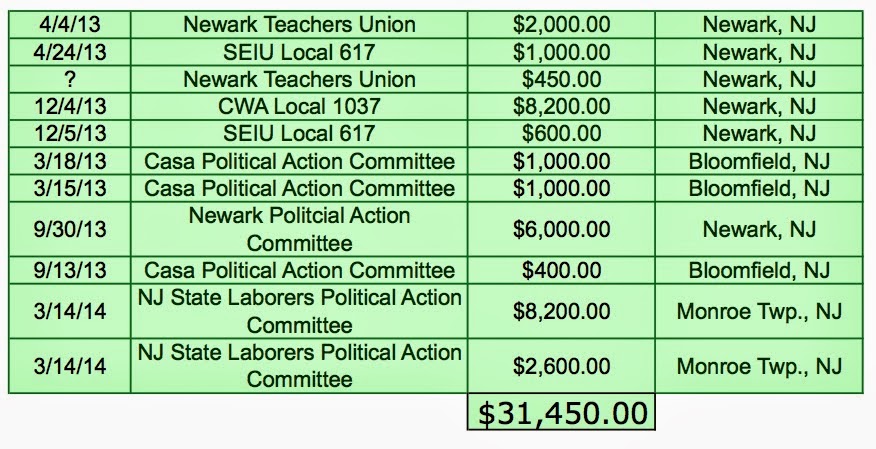 I found three that had spent money for Baraka.

The most came from Working Families Alliance, which ran a series of ads against Jeffries and his Wall Street connections.

Working Families Alliance is a 501C4, and as such is not obligated to list their contributors. Their website gives a pretty good indication where their money likely comes from, and while it does include unions, it comes from other sources as well, including environmental groups.


New Jersey Working Families was founded in 2007 by union organizers, parents, environmentalists, and ordinary New Jerseyans who want to ensure that our state and local government serve the interests of working families instead of big business. Since that time we’ve spearheaded the state’s campaign for revenue solutions that would help us create jobs and reinvest in schools, public safety and health care by asking the wealthy and corporations to pay their fair share.

The smallest amount came from the Committee for Economic Growth and Social Justice, which has ties to Union County Democratic Senator Raymond Lesniak. They spent $69,860 on TV ads and canvassing.

And no matter how hard I tried, the only direct union money I could find came from AFT, and it was a mere $92,900 from the American Federation of Teachers, AFL-CIO, AFT Solidarity 527 PAC. 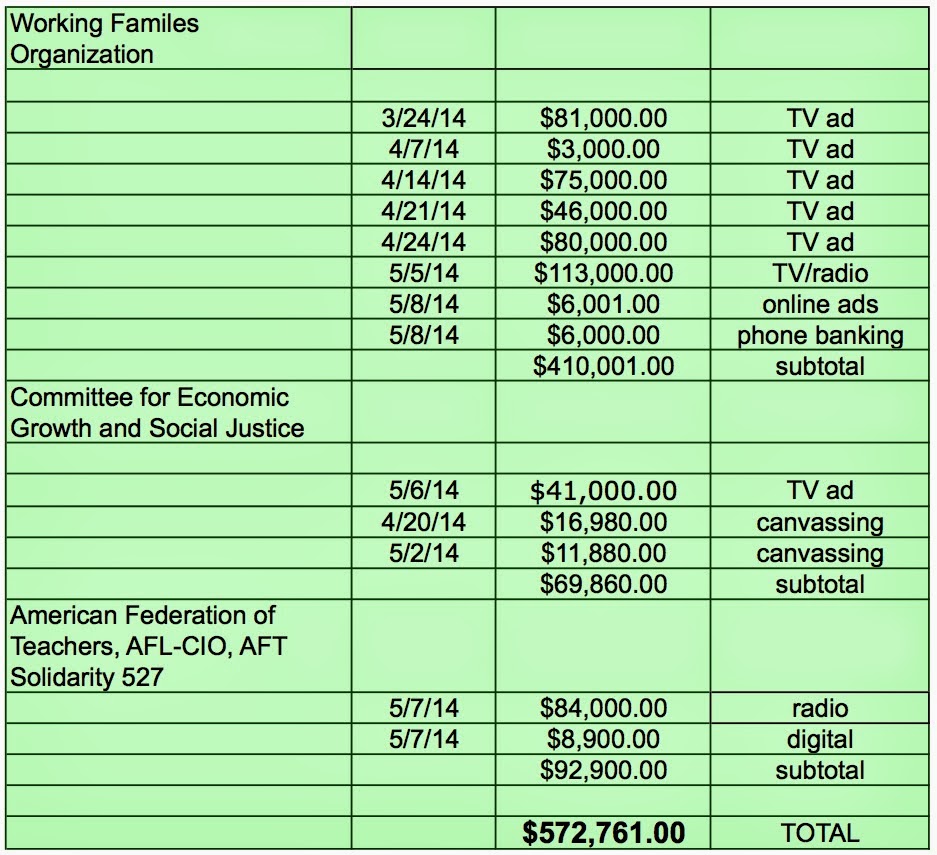 If there was some avalanche of union cash in this race, I sure as heck can't find it. If someone can point me to it I am happy to be proved wrong, and I will post new totals and amounts if indeed union spending came anywhere near the Wall Street spending.

But from what I can see, Baraka and the big, bad unions were outspent by about 8:1.

If anything, I think those of us who support public education should be kind of pissed they didn't spend a whole lot more.


.@EduShyster .@MotherCrusader .@alexanderrusso How many taxpaying voters were represented by the union $? How many by DFER $?
— Lawrence A Feinberg (@lfeinberg) May 16, 2014


@lfeinberg @EduShyster @MotherCrusader @alexanderrusso Every union penny was worth it. Did they expect us to roll over & play dead?
— john thompson (@drjohnthompson) May 16, 2014


Posted by Mother Crusader at 1:45 PM