The Newark mayoral race is heating up with less than a week to go, and there has been plenty of discussion about an influx of cash to the Jeffries campaign and questions as to where the money is coming from. 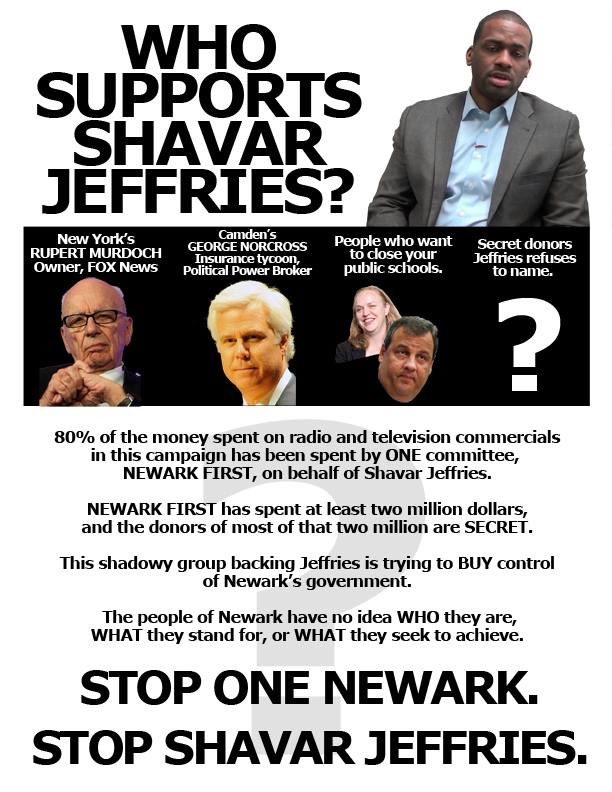 "Who will move Newark in a new direction? Not councilman Ras Baraka," the narrator said. "Jeffries is a different kind of leader.

The group has raised more than $1.3 million. Its donors include several financial executives and an $850,000 donation from Education Reform Now, a politically active education reform organization, according to its election filing report.

Newark First has spent almost $425,000 on the election, the report says. (emphasis mine)

And in case you're not up on DFER, I'll let DFER Watch fill you in on exactly who they are and what they stand for. 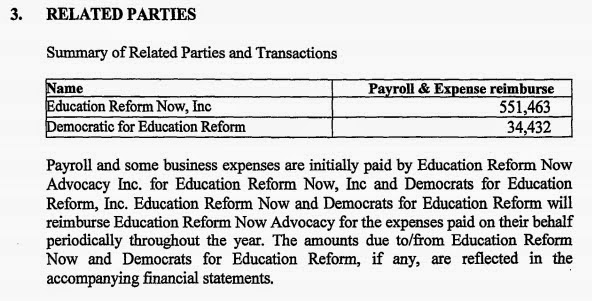 Across the Hudson in New York the connections between Students First, DFER and Education Reform Now have been no secret.

The future of the fight over public schools has a fresh, highly visible face, and it’s called StudentsFirstNY.
But the new school-reform supergroup, founded by former New York City Schools Chancellor Joel Klein and ex-D.C. schools chief Michelle Rhee, is in fact not that new at all. It builds directly one of the biggest lobbying forces in New York State, called Education Reform Now.
In the last two years, Education Reform Now and the associated Education Reform Now Advocacy have spent more than $10 million to influence state law on hiring and firing of teachers, as a counterforce to the state’s two major teachers’ unions.

“We’re going up against one of the most powerful interests in Albany,” said Joe Williams, who directs both Education Reform Now and Democrats for Education Reform, to the New York Post. “We don’t stand a chance if we’re not aligned and focused.” (emphasis mine)

Read the whole article linked above from The New York World, it is a real eye opener for sure. It draws clear lines between the money flowing into these groups and their education reform agenda in New York and across the nation.

Williams told The New York World that Klein’s new group and his old one will likely share some of their funders and board members. “I imagine there will be a large overlap among the donors,” he said. “But it’s not clear yet what role we’ll actually play.”
Education Reform Now does not disclose its donors, but among those who have publicized contributions are the Bill and Melinda Gates, Walton, Starr, Broad and Pershing Square foundations. (emphasis mine)

So if New York is any indication, the money flowing into the Jeffries campaign is a combination of Wall Street money and Broad, Walton, Gates etal. money.

I know, a real shocker, right?

But in case you're still not convinced, check out the timing of these direct pleas for contributions.

Joe Williams made his pitch on the DFER website on April 11th, touting Jeffries' "reform cred."

Raised by his grandma in Newark’s South Ward, Shavar has dedicated his career to helping kids as president of the city’s Boys and Girls Club, head of Newark’s School Advisory Board, and founding board president of TEAM Academy Charter. Yet despite his reform cred, he remains in a close race leading up to the May 13th election. His opponent, Ras Baraka, promises to undo progress made during Cory Booker’s tenure, and has $ pouring in from the Newark Teachers Union endorsing his campaign. Donate just $10 to Shavar by clicking here.

But to win, he needs a lot of money fast, as the election is less than two months away, so I hope you’ll join me in supporting him – just click here: http://bit.ly/1lLB7Sb

When Joe Williams and Whitney Tilson put out the call, it's not hard to imagine that millions come rolling in very quickly.

Lo and behold, on April 21st reports began surfacing that $1.3 million had been dumped into the Jeffries war chest by "super PAC, Newark First."

In case you're thinking the claim in the graphic above from the Baraka campaign that the "shadowy group" behind Newark First is trying to "buy control of Newark's government" is far fetched, perhaps a final look at Education Reform Now's two biggest expenditures in 2012, as reported on their 990, will convince you that it's not.

Almost $5 million to "increase the number of public charter school [sic] and strengthen teacher evaluation procedures" and half a million to try to shut up Chicago Teachers Union President Karen Lewis. (Good luck with that one guys!)

Education Reform Now has a very clear anti union, pro reform agenda, which fits in just perfectly with Governor Christie and Superintendent Cami Anderson's One Newark plan, and they are attempting to steal the Newark mayoral race from Ras Baraka. Baraka has made it clear that he will lead a "full scale campaign for local control of schools" which will not bode well for the continued state takeover in Newark or One Newark.


Governor Christie is clear in his disdain and disregard for the citizens of Newark. He did say, "We run the school district in Newark, not them." He has disenfranchised the people of Newark by installing leadership at every level that believes this as deeply as he does and goes to every end to exclude, marginalize, and eliminate anyone who does not. (emphasis mine)

And it looks like Governor Christie and Cami Anderson have found an ally in DFER and Education Reform Now for eliminating Ras Baraka. 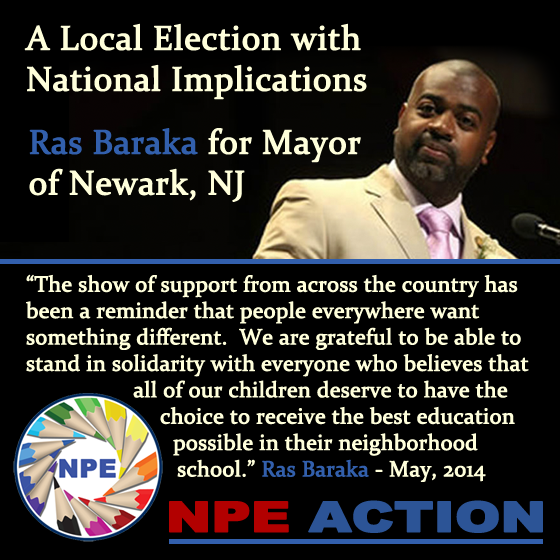 Posted by Mother Crusader at 3:29 AM