What's The Cost Of Four Cyber Charters in Newark? $17.5 Million.

Yesterday we took an in-depth look at how Benjamin Rayer was able to get his cyber charters approved.  Today I want to take a look at how the state managed to push FOUR cyber charters through, all in the same city, including one that will ultimately serve the whole state but initially pulled all of the start-up funds from Newark.


Before we get started, let's look at where the NJDOE couldn't get one through, and why.

The Garden State Virtual Academy, if approved, would have taken $15.4M out of Teaneck's budget for 1,000 students that ultimately would have been drawn from the entire state.  But because the drop-in center would have been in Teaneck, and the Lead Founder was from Teaneck, the district would have footed the ENTIRE bill for the first year, until it was determined where the 1,000 students actually came from.  And that wouldn't happen until October 15th, well after the school year began, which would have meant drastic cuts to the budget.


When the parents and residents of that town learned what was happening, they became a force to be reckoned with!

Check out this video.


I love the quote from Dr. Henry Pruitt at the end.  At the time he was a Teaneck School Board Member, but was just recently elected to Teaneck's Town Council.  He is a former teacher and principal, and he gets what is going on.


If the state wants a charter school, they should find a way to pay for it.


The citizens of Teaneck and their elected officials put so much pressure on the NJDOE, that when they held a rally at their high school, NBC New York's Brian Thompson came out to cover the event.  Sadly, the video seems to no longer be available, but check out this gem on the NBC website:


The proposed budget for the Garden State Virtual Charter School calls for a small drop-in center to be located in Teaneck, but it would otherwise focus on home school students across the state.

It also projects a $4.7 million balance but does not specify what the money would be used for, or if it would be split as profit among the four listed founders, which include a lawyer, a subsitute teacher and a curriculum director for the New York City Department of Education. (emphasis mine)

The application and the issues surrounding it became such a hot potato that the NJDOE cut Garden State Virtual in the middle of an application cycle, which had NEVER been done before.


So, if you can't make a statewide virtual charter work in Teaneck because the parents, residents, superintendent, school board, politicians, and press will have a field day with the ridiculousness of a $4.7 million bottom line, where can you put one?


This, and this alone, explains how four cyber charters may be opening in Newark this Fall.  There is no local control and no local voice.  It has been snuffed out.


So, how much is this going to cost NEWARK?

Here is a chart I made, which details the four cyber charters pending in Newark, the cost to the district as a whole, and the cost per student. 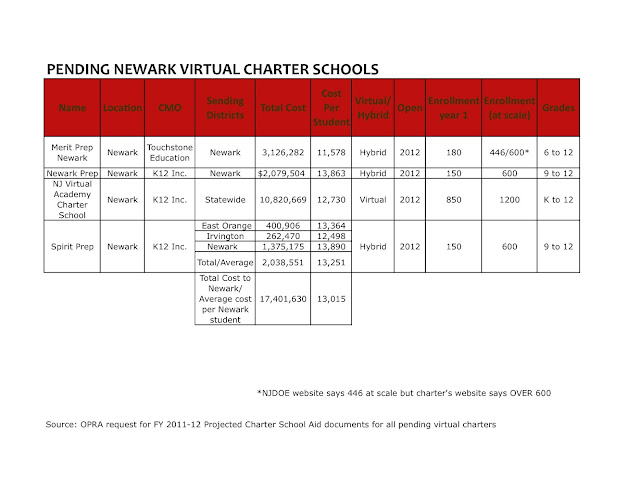 The Pennsylvania Department of the Auditor General, Jack Wagner, just released a report titled "Charter and Cyber Charter Education Funding Reform Should Save Taxpayers $365 Million Annually," in which he detailed the spending per pupil in states where cyber charters are already operational.  He found that the cost per student ranged from a high of $12,657 in Pennsylvania to a low of $7,671 in Arizona.

I stumbled upon the actual funding and expenditures for the Arizona Virtual Academy, run by K12 Inc., which will run the NJ Virtual Academy as well.  It states that they spend $7,164 per student.

So, why are they going to get $12,730 per student in New Jersey???  I haven't delved into how much profit K12 Inc. is making off the Arizona Virtual Academy, but we will assume there is profit being made, even at $7,164.

But for the sake of argument, I'll ignore that for right now.  Let's pretend every dime of that money goes to the students at Arizona Virtual Academy.  Let's just look at how much more we will be paying in NJ if Cerf doesn't stop this nonsense.

Multiply that by the 850 prospective students, and you get a net profit of $4,731,100, the same profit for the Garden State Virtual Academy in Teaneck.

So that's how you do it.  Just put your cyber charter in a district where the collusion runs so deep, it may never come to light how much money is being scammed from the taxpayers.

Teaneck taught us that without outrage, there is no change.

The entire state needs to be outraged about what's happening in Newark.
Posted by Mother Crusader at 2:42 PM