This is the story of Benjamin Rayer, and how he got approval for not one, but TWO charter schools from the NJDOE.  It's an unlikely story, since our protagonist isn't even a resident of our fair state!!  But that didn't deter Benjamin from applying as the lead founder for both charters, no siree!  After all, he knew he had the right reformy qualifications to get ahead in New Jersey!


He is on the Springfield Township Board of Education in Montgomery County, Pennsylvania.  As you can see, his short bio on the district website lists his most impressive qualifications:


Having connections to Broad will certainly get you places in New Jersey!


But it also says he's CEO of Touchstone Education.  What's that?


Touchstone Education operates high-performing secondary schools that are changing the landscape of education across America. By integrating modern technology and best in class education strategies, we provide every student with a personalized education that ensures that all of our students are accepted to college and are prepared for the worlds of work and life.

So how many schools is Touchstone Education currently operating to back up this claim that they "are changing the landscape of education across America."


Touchstone is a start-up charter management organization (CMO), and Merit Prep Newark will be the first school it operates.


But, they must be great, because they have some big plans and big money.  After all, the Charter School Growth Fund has given Touchstone $3.6M.

Rayer, founder of Touchstone Education, a charter management organization (CMO), does not hide that he hopes to take his model national. He has already drawn impressive sums from some big names in education reform.

One is the Charter School Growth Fund in Colorado, which is putting up more than $3.6 million for Rayer’s CMO. The fund is headed by Kevin Hall, the former president of the Broad Foundation, a big force in education reform circles.


Ah, one Broadie scratching the back of another Broadie.  And really Mr. Mooney?  A "big force?"  That may be the understatement of the century...

Touchstone Education is a new school management organization that will operate secondary (grades 6-12) blended learning schools across the United States. Touchstone will open its inital charter schools in Newark and Trenton, New Jersey in August 2012. Touchstone was created to reimagine secondary school by combining effective instructional practices and new technology to deliver personalized learning programs so that students are prepared to succeed in college and in life.

During the first phase of Touchstone's growth, it plans to launch six schools in New Jersey that will ultimately create over 3,600 new seats of student capacity in blended learning secondary schools.

New Jersey is just the "first phase" before he takes Touchstone national.  And man, does he have some big plans for New Jersey or what?


Why did he pick New Jersey as a stepping stone instead of his home state of Pennsylvania?  Let's take a look at when his charters were approved and see if we get any answers there, beyond the obvious Broad connections which seem to have served him pretty well thus far in our story.

Both of Rayer's charters were approved in the 2011 expedited round of applications.  If you look at the list in the link you will note that this was the first time he applied as well, so he hit a grand slam his first time at bat.  Pretty impressive.  He applied for Newark Prep Charter School (Now called Merit Prep Newark) and Trenton Prep Charter School (Now called Merit Prep Trenton), and both won approval.  They were two of eight applications approved in that round.

Carly Bolger oversaw that round of applications as the Director of the Office of Charter Schools, until she left at the end of 2011, supposedly for "personal reasons." Turns out, Bolger and Rayer both worked for the Philadelphia School District's Office of Charter, Partnership, & New Schools, and they worked there at the SAME TIME.  Rayer was her boss.


Looks like the stars really aligned for our protagonist.  A Broad infested NJDOE, Broad buddies with big money, and a former employee running the application process in New Jersey!

And where will Merit Prep Newark be located?  It will be co-located at 909 Broad Street in Newark, along with TEAM, KIPP and Newark Collegiate Academy, so it would seem that Rayer has been welcomed with open arms by the established Newark charter elite as well. 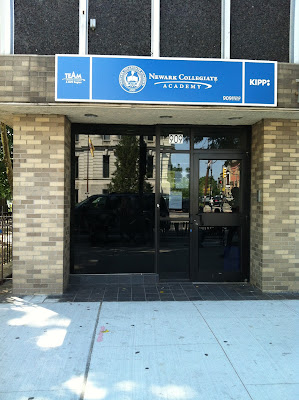 In case you think all of this was an easy feat, the story of Tom Vander Ark will dispel that notion.

Vander Ark is no slouch himself.  He was the former Executive Director of Education for the Bill and Melinda Gates Foundation, and was also poised to run two cybercharters in New Jersey, Newark Prep (approved as Vailsburg Prep) and Spirit Prep, and he also had approval for a cybercharter in Brooklyn.  He had his own CMO too, called City Prep Academies, and Vander Ark claimed he was also going to get money from the Charter School Growth Fund.

Mr. Vander Ark had been unable to get any money from the Charter School Growth Fund or other similar national organizations. He had basically abandoned the idea of beginning a charter management organization and left the three schools-in-progress to find outside help on their own.
Mr. Tillotson, the consultant, said: “It signals what’s wrong with the so-called charter school community. Somebody who doesn’t deserve a charter gets a charter. Somebody who doesn’t deserve a building gets a building. And then somebody who doesn’t care about the communities can turn their head and walk away.”

Without the big money from the Charter School Growth Fund, despite his pedigree, Vander Ark just couldn't get his charters off the ground.  Now Newark Prep and Spirit Prep are in the hands of K12 Inc., but that's a story for another day...  For the purposes of our story, it looks like Rayer's Broad connections at the Charter School Growth Fund may have been the difference between success and failure.

There is just one last chapter left to tell in the story of Benjamin's ascention.  In case you haven't put it together yet, Benjamin is both the lead founder of the charters AND the CEO of the CMO.  This was made abundantly clear in the application for the charter.  (See pages 57-58).  Touchstone was originally called Platform Academies, and remember Merit Prep Newark was approved as Newark Preparatory Charter School (I know, it is hard to keep track with all of this name-changing!)


After the charter is granted and pending Board approval, Newark Preparatory Charter School will enter into a management contract with a high-performing non-profit charter management organization (CMO).

If approved, the CMO will provide management, operations and instructional program consulting services to Newark Preparatory Charter School.   The CMO will be responsible for providing the overall academic program and tools to execute and apply at Newark Preparatory Charter School. The CMO will also manage all business operations of the school including financial management, facilities and human resources.  Newark Preparatory Charter School will negotiate with the selected CMO to determine a fee that will be in the range of 12% of the school’s local and state share of equalization aid. The term of the contract is expected to be one-year and can be renewed annually. The contract can be terminated with cause. The contract may also be terminated upon written agreement of both parties.

The Office of Charter Schools actually questioned Rayer on this very point in a Request for Addenda to the application, and wanted assurances that all transactions would be at "arm's length." (See pages 4-5).   The only concrete assurance given was that if Rayer's CMO won the bid (*cough*) to run the charter, Rayer would not be on the Board of Trustees.


I don't know about you, but that doesn't reassure me too much.


I would like to see the RFP's that went out looking for two other "high-performing CMO's" that may have been able to provide these services to the taxpayers of New Jersey for less than "the range of 12%."  Amazing how Rayer's CMO, which remember, is a start-up, managed to come out on top and get the contract for a high-performing CMO!


I'd also like to know who is on the Board of Trustees. Then maybe we would could find out how this decision was made.  Just knowing that supposedly Rayer isn't on the board doesn't really impress me.


I have scoured the Merit Prep website, and all I can come up with as a contact is Erika Ellison, Director of Operations for Touchstone Education.  Anyone else think it's peculiar that the only contact for the charter works for the CMO?  No principal or lead person contact information, just someone from corporate who seems to have no background in education, other than working for Mastery Charter Schools, where coincidentally Rayer was the Chief Operating Officer before he worked for, and mysteriously resigned from, the School District of Philadelphia.


There is no list of Board Members either.  No list of meeting dates, or minutes of previous meetings, which you will find on just about any district website.


And look at this statement about the influence Vander Ark had on the charters he was planning to manage:


The newspaper first reported in early July the news about the diminished role of Vander Ark, who had provided essential services such as professional writing for the charter application, forming the charter school boards, footing lawyer fees, and initial interviews for staff. (emphasis mine)

So forgive me if I don't buy that Rayer has had no influence on the appointment of the Board of Trustees, especially since we have no idea who they are and how they decided to select his CMO to run the schools for which he also served as Lead Founder.


So, that's how you do it friends. That's how you get yourself poised to open a whole slew of charters in New Jersey, and if you're successful there, maybe the nation.  You just need the right connections to get a couple approvals and a lot of money.


Then make sure there is no public trail of the bid for your CMO to run the chain of charters you got approved and voilà, you're the self appointed King of Cybercharters in New Jersey!

Posted by Mother Crusader at 4:01 PM