Trenton Insider And Princeton Charter School Trustee Not In Favor Of Local Control. What A Surprise!!

An op-ed in today's Asbury Park Press is a pretty typical piece of reformy writing.  Paul Josephson comes out of the gate swinging with reformy talking points.  Heck, "status quo" is in the title of the piece!


It drones on in much the same fashion, finger wagging at typical reformy targets, teachers' unions and school boards.


Teachers’ unions and school boards across the state have scared parents and teachers with the mantra that public charter schools are robbing their districts of revenues. They want taxpayers to believe that public charter schools are to blame for reductions and layoffs. They prefer to vilify charters and avoid responsibility for the real reforms and tough choices we need to make.


Save Our Schools NJ, is a grassroots organization led and run by parents - not unions or school boards - and works to ensure that local communities have a say in whether they want a charter.


I have testified before both the Senate and Assembly Education Committees.  The only fancy lobbyists I have seen were Carlos Perez of the New Jersey Charter Schools Association, with lobbyists from the National Association of Charter School Authorizers and the National Alliance for Public Charter Schools in tow.  They testified against local control and hobnobbed with NJDOE officials in the hallway.  They had fancy suits and glossy brochures, and more Walton, Gates and Robertson Foundation money behind them than I could ever imagine seeing in my lifetime.


Exactly who is Mr. Josephson anyway, and what game is he playing here?  At the bottom of the op-ed it says he is a trustee of the Princeton Charter School.  Check out his bio on the schools website.


Paul is Partner-in-Charge of the Regulatory & Government Practice at Hill Wallack LLP in Princeton, and Principal in Government Process Solutions LLC, a Trenton policy and media firm. He litigates for and advises corporations, nonprofits and public entities on administrative and procurement matters, governance, and communications strategies. He previously served the State of New Jersey as Chief Counsel to the Governor, Chief of Authorities, and Director of the Division of Law, overseeing the State's 550 civil attorneys and its 50 independent authorities. He advises numerous Democratic and Republican officeholders and lectures on policy, election and ethics issues.  He chairs the New Jersey State Bar Association's Administrative Law Section and is a member of the Citizen's Campaign Legal Task Force, which promotes citizen-led government reforms. (emphasis mine)


Now we're getting somewhere.  Not exactly a Trenton outsider.  So, let's see, what does Government Process Solutions LLC do?


At Government Process Solutions (GPS), we provide unmatched strategic guidance and services for our clients' most difficult public affairs challenges. Our bipartisan professionals combine over 90 years of experience in government, law and business development to provide unique and creative solutions to any government problem.  (emphasis mine)


Well, there you have it.  Mr. Josephson is using the op-ed page of the Asbury Park Press to "provide a unique and creative solution" to a "government problem."  Namely, that parents in the state of New Jersey are showing how powerful their voice is, and have become a "difficult public affairs challenge."  What better way to squelch that voice then to claim that the driving force behind the legislation is actually unions and school boards.  Much better targets and easier scapegoats, especially in New Jersey under Chris Christie.


Strange that someone that's a member of the Citizen's Campaign Legal Task Force, which claims "to teach citizens about the legal rights and political skills they need to bring constructive, responsible leadership to the service of our communities and our country" would lash out this way against legislation that is being driven by public outcry.


Parents, not the school boards and the teachers unions, are making it hard for the actual powers that be, namely the Governor, Education Commissioner Chris Cerf and the big money backers of the New Jersey Charter Schools Association, to jam their agenda of more charter schools down the throats of New Jersey parents that support public education.


We're not going away either.


Mr. Josephson purposefully has it backwards.  Clearly, this guy is not a novice.  He knows his way around the charter school issue, the media, and the Statehouse.


This op-ed is nothing but a smear campaign.


Looks to me like Mr. Josephson is protecting his own status quo.  After all, Princeton Charter has been around since 1997; it is one of the oldest charters in the state.  Perhaps now that the tide is turning on charters, especially those in the suburbs, he is feeling like he needs to defend his school.


In fact, just recently the Princeton School Board did an analysis and stated they believe they could save $3.15 million if the Princeton Charter school was absorbed into the regular public school system.  Gee, I am sure the taxpayers in Princeton are interested in that number.


Could there be any other reason he wants to keep traditional public school parents from asking too many questions?  Let's take a quick look at the kids Princeton Charter School is serving. 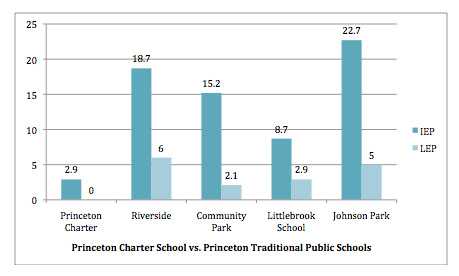 Looks a lot like they are "cream skimming" off of the traditional public schools, doesn't it?  Perhaps the backlash against "boutique charters" in suburbs, which has even Governor Christie and Acting Commissioner Cerf questioning the need for charters in successful districts, has Mr. Josephson a little nervous too?


In his argument against local control Mr. Josephson threw out a huge red herring.   He tried desperately to make the argument that because the majority of school boards decided to move their elections to November, thus doing away with the need for voter approval on school budgets if districts stay within a 2% cap, school boards are being hypocritical to support voter referendums on charters.


Here's a bit more detail on the legislation, as well as what the Governor himself had to say about it:


Perhaps the most far-reaching consequence is districts that switch their elections to November are no longer compelled to put their budgets before voters for approval, provided they stay within the 2 percent tax levy cap. Any requests for spending above the cap would be presented to the voters in November.
"I urge school board members and voters in every one of our districts to act as quickly as possible to take hold of these benefits," Christie said when signing the bill. (emphasis mine)
And as Save Our Schools NJ pointed out in their comment to Mr. Josephsons' op-ed:
In most cases, even in towns that have moved their school budget elections in November, the local community would still have a say before a new traditional public school is opened with local tax dollars, most likely through a November ballot question on a bond amount; why shouldn't the public also have a vote on the opening of charter school paid for with local tax dollars?  (emphasis mine)


So Mr. Josephson, clearly you are trying to obfuscate the facts here.  The tax burden of any new school, charter or traditional public, should be put to the voters.  And not having to put the budget up for a vote every year is not a get out of jail free card for districts.  If the budget needs to increase more than 2%, or a new school is needed, the budget gets voted on.


I'll make you a deal.  You subject your charter school's budget to the will of the people for as many years as the traditional public schools in Princeton have.  Spend months and months preparing it, only to have each line item scrutinized, and folks come out just to vote it down because they don't want to pay ANY taxes for public schools let alone MORE taxes!   And then deal with a bully of a Governor telling those same taxpayers to vote down your budget and see how you make out.


What's that?  No thank you?  Well, I can't blame you.  The charter status quo is pretty sweet.  It must be awfully nice to get public dollars, not have to educate the same population as the rest of the district and not have to deal with public scrutiny to boot.


Check out today's piece by the Washington Post's wonderful Valerie Strauss about the failure of parent trigger legislation in Florida.


In the Florida capital today, as the legislature was debating and voting the bill, proponents, who had been dropped off in vans, wore yellow T-shirts with “Parent Power” emblazoned on them, and they handed out fliers calling Florida parent groups “union affiliates” and defenders of the status quo. Those are insults often hurled at those who oppose the “school choice” movement and standardized test-based accountability. (emphasis mine)


Like I said, Mr. Josephson's reformy talking points aren't terribly original.  Looks like legislators may finally be catching on.
Posted by Mother Crusader at 1:39 PM