At a Town Hall meeting in Voorhees, New Jersey yesterday several vocal Voorhees and Cherry Hill residents challenged Governor Christie about the approval of the Regis Academy Charter School.  The Rev. Amir Khan is the lead founder of Regis Academy and also the senior pastor of the Solid Rock Worship Center, which will house the charter.
Regis Academy was approved in September of 2011 as one of only four charters approved in that round of applications.  The New Jersey Department of Education said the four approvals were a result of a rigorous review process and they were confident the four schools would offer students a great education on day one of the school year.”
In New Jersey Monthly however, Sara Butrymowicz reported that David Sciarra of the Education Law Center felt the low number of approvals raised “a lot of red flags of what’s really going on behind closed doors at the (New Jersey) Department of Education.  Because of the lack of public discourse about it (and) refusal to be open and transparent, the public is left in the dark about what happened here.”
In October, John Mooney of NJ Spotlight wrote a piece titled Church, State and Charter Schools, in which he stated that the Rev. Reginald Jackson helped steer four charter applications from pastors on the Black Ministers Council of New Jersey, of which he is president.  One of these applications was for the Regis Academy charter.
And yesterday the Philadelphia Inquirer reported that Khan has said he sits on a committee of African American pastors that he said has met frequently with Christie on the issue of charter schools.
An Asbury Park Press reporter detailed a heated exchange between Governor Christie and one of those four vocal residents, Alan Erlich of Cherry Hill about the Governor’s relationship to Kahn:
But after Erlich charged the charter school’s approval was a favor for a Christie supporter, the governor denied the claim.
“Who are you talking about?” asked Christie, who went on to say he does not know Amir Khan, a pastor who is organizing the school at a church complex in the Ashland area. “I haven’t given one friend a charter school.”
The exchange is already memorialized on YouTube, like so many other clashes between Christie and audience members.
What may make this one particularly interesting is that just after Governor Christie says he doesn’t know who Amir Khan is, the camera pans back, and who is sitting behind Governor Christie on the dais?  Amir Khan.  Sitting right underneath the “Jersey Comeback” banner.  Here is a still: 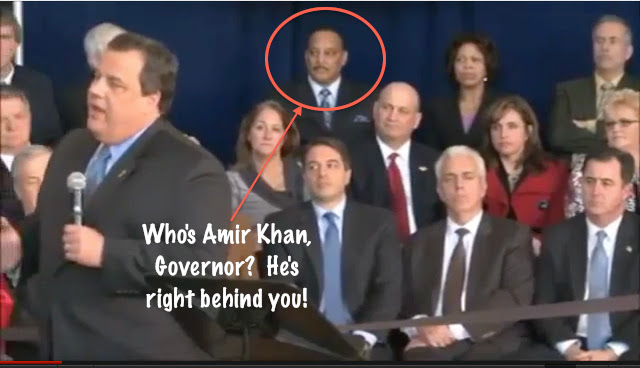 The woman sitting to Khan’s left is his wife; pastor Aughtney Khan, also a founder of Regis Academy.
The pastors Khan, founders of the Regis Academy Charter School, sitting not just in the audience, but on the dais behind the governor, makes it awfully hard to believe that Regis Academy was not one of only four approvals in September because of pastor Khan’s connections to Rev. Jackson, the Black Minister’s Council and Governor Christie himself.   Especially with his repeated pronouncements yesterday that not only does Cherry Hill not need a charter school, he has told Acting Commissioner Cerf that charters should be focused predominately in failing districts.  Oh, and let's not forget, he has no say in what charters do and don't get approved?  Then why was Regis Academy approved in Cherry Hill?
Looks like in education the Governor's Jersey Comeback will be stronger and better for those with connections to the Governor.

UPDATE:  I have confirmed with multiple individuals in attendance at the Town Hall Meeting that Amir Khan was seen behind the curtain that was behind the platform.  Governor Christie came out from behind the same curtain.  Khan was allegedly behind the curtain for some time, and only came out and took his seat under the Jersey Comeback banner 5 minutes before the Governor.
Posted by Mother Crusader at 7:34 AM