Gov. Christie: I Am Not a King

There has been no shortage of outrage in Voorhees and Cherry Hill over the Regis Academy Charter School.  Cherry Hill is challenging the approval in court, and I posted earlier about Cherry Hill Superintendent Dr. Reusche's response to bogus claims made by Regis founder Rev. Amir Khan about the achievement gap in Cherry Hill's schools.

Voorhees was also facing an application for the Creative Studies Charter School, which applied in October but was axed in the first round of cuts on December 12th.  Folks from Voorhees joined Speak Up Highland Park at our Occupy the DOE event anyway on December 16th. 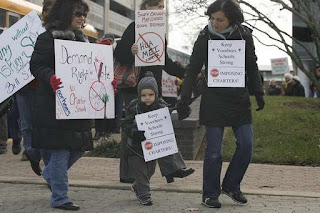 So it's no big surprise that there were protestors both outside the event and inside as well.


Gov. Christie, who held a town-hall meeting in Voorhees Wednesday to sell his plans for New Jersey for 2012, was bombarded with questions about a charter school opening in Cherry Hill.
Christie said he'd prefer that charter schools open only in struggling school districts rather than compete with high-performing public schools, such as those in Voorhees and Cherry Hill. But he said the law prevents him from barring the Regis Academy from opening.
"I am not a king, despite the fact that I would love to be," Christie said after an outburst from Alan Ehrlach, a Cherry Hill resident. "I have to operate within the law."
Christie urged the four people who spoke up about the Regis Academy to call their legislators and ask them to pass a law that narrows the areas charter schools can operate in. He would sign a law, but he can't make the legislature pass it, he said.
The Regis Academy, which would be located in Cherry Hill and serve kindergarten through eighth-grade students from Cherry Hill, Voorhees, Lawnside, and Somerdale, has already been approved by the state Department of Education.
But has drawn fierce opposition from officials and residents in some of these suburban towns.
"Our schools are extremely successful," Melissa Sable, 44, a teacher who lives in Voorhees. She asked Christie why Christie wasn't doing anything to stop the school from opening and taking taxpayer dollars away from the public schools. Christie again said the law prevents him from restricting where charter schools open.
The movement to take charters beyond their traditional urban setting into the suburbs, where residents expect a quality school system in return for higher property taxes, has turned New Jersey into a battleground.
Cherry Hill has taken the rare step of challenging Regis' charter approval. (emphasis mine)

OK, a few points.  This is not a news flash.  Christie has said numerous times in the last six months that charters should be primarily in "failing" districts.  I blogged about this after WNYC's Nancy Solomon said the suburban charter school battle could be Christie's Waterloo.
And check out this video.  At about the 31:30 mark Christie answers a question from an angry Cherry Hill resident who wanted to know why Regis was approved.  Christie throws Cerf right under the charter school bus and says that he has told "the educational community" that he thinks charters should be "predominately, if not exclusively" in failing districts.  I guess Cerf has been going rouge...


Watch live streaming video from townsquaremedianj at livestream.com
So, what better way to stop the battle than to show up on the battlefield and say, "Hey, I'd love to help you guys out here, but it's not my show!  I've tried telling the education community, and they didn't listen.  Now YOU need to go tell the legislators.  If they write it, I'll pass it, but I'm not the king, remember?"


Perfect plan!  No accountability for Cerf or Christie; not only do they get the suburban public school parents to quiet down, they harness their energy and channel it against the urban public school parents.  As an added bonus, Christie gets legislation passed that says go ahead and open as many charters as you want, as long as they are in failing districts!  Who's gonna complain?


This is some masterful politics.  Turn your potential Waterloo into a windfall.  Who wants to bet that THIS is why there was no announcement on Tuesday telling the people of New Jersey which charters made the final cut.  Christie and Cerf had this up their sleeve all along.  First the State of the State, then this perfectly planned Town Hall, then the announcements.


Who wants to bet there are no suburban charters approved in this round?


Christie may be selling it, but don't buy it New Jersey!  Don't let Christie and Cerf jam more unaccountable charters into ANY district, suburban OR urban.   If you want to contact your legislators, join almost 5,000 others New Jersey residents that want local control over charters and sign this Save Our Schools New Jersey petition instead.  It will send an email directly to your Senator and the Senate Education Committee as well.


And until we get that passed, and until Cerf releases the Charter Report with real data letting us know how the charters already open are performing, join me, Jersey Jazzman and Stan Karp and throw your support behind a New Jersey Charter School Moratorium.  We need to stick together and not divide our state into those who should get a say in what happens to their public schools and those that shouldn't.  Let's fight for public education together.


BTW, guess who was behind Christie on the dais as he claimed that it's the law that prevents him from barring the Regis Academy Charter School from opening?  The founder of Regis Academy Charter School, Reverend Amir Khan.  Not the Superintendents of any of the successful districts.  The founder of the embattled, unproven charter school that is "forging excellence" in ValPac advertisements.  Now THAT'S innovative.

So who do you think Christie is really fighting for?
Posted by Mother Crusader at 12:14 AM