Arne, can you hear me?

So many things to love about Mike Winerip's column in today's New York Times.  What it really boils down to is a cautionary tale.


A cautionary tale of an unaccountable applicant, Sharon Akman:


Ms. Akman has repeatedly refused to talk to reporters. She did not respond to a dozen e-mails and voice mail messages left at the real estate office where she works, Century 21 J. J. Laufer in Highland Park. When I called the personal cellphone number she listed on the state application, a woman answered. “Who’s calling?” she asked, and when I explained that I was a reporter, she said, “I’ll tell them you called, thank you,” and hung up.


A cautionary tale of an unaccountable Acting Commissioner of Education, Chris Cerf:


An applicant with a $600,000 pledge in her pocket may be seen in a new light by state officials. In mid-October, Ms. Akman wrote to the state’s acting education commissioner, Christopher D. Cerf, requesting assistance in winning approval for her fourth application. “We were just granted a substantial federal charter school grant,” she wrote him, and would “love to have a meeting to better strategize and prepare for our reapplication.”

How Mr. Cerf responded is not known. E-mails between Ms. Akman and Mr. Cerf’s office were released after a request under the state’s Open Public Records Act. While Ms. Akman’s string of e-mails was made public, responses from Mr. Cerf’s office were redacted.
And a cautionary tale of an unaccountable Secretary of Education, Arne Duncan:
How could federal oversight be so lax?
Part of the answer is that charter schools are a top priority for the Obama administration, making federal officials predisposed to support them.
And part of the answer, as Justin Hamilton, an Education Department spokesman, explained in an e-mail, is that federal officials see their oversight role as limited. The department hires private consultants to rate the quality of a charter applicant, but those consultants “cannot use information not included in the grant application,” he said.
In other words, if Ms. Akman writes that Assemblyman Peter J. Barnes III supports the charter, the federal consultants are not permitted to interview Mr. Barnes, who would have been happy to tell them that he does not.
This prohibition against using outside information is intended to ensure that no special measures are taken to either favor or hinder an applicant, although what it really invites is fiction writing.
And that is EXACTLY what the Tikun Olam applications, both the state application for a charter and the federal application for a grant, are.  Fiction.
Justin Hamilton goes on the say that "if the Education Department “becomes aware of material factual misrepresentations,” it could terminate the grant."
But they already know!  We have provided the Office of Innovation and Improvement's Charter School Program with more information than we provided Mike Winerip.  Not only that, we have had numerous phone conversations with the Director of the Charter School Program, Stefan Huh, and LaShawndra Thornton, the Non-State Education Agency Grants Intern Manager, who actually signed off on the grant.  In addition, numerous members of our community have emailed and called alerting the office to the misrepresentations.
They have also been contacted by Congressman Pallone and Senator Lautenberg's offices but have not stated anything more substantial than that they are "aware there are issues with this particular grant award and are looking into it."
Perhaps a NY Times expose will be enough to make lead applicant Sharon Akman pull her application?
If not, perhaps it will be enough to make Acting Commissioner Chris Cerf deny the application?
If not, perhaps it will be enough to make Secretary of Education Arne Duncan pull the grant? 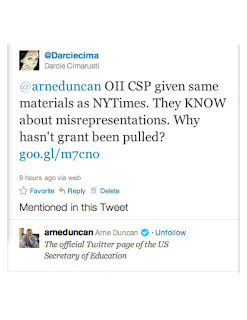 I'm not holding my breath.  I think we probably still have a lot of work to do.
Posted by Mother Crusader at 10:31 AM