Step Right Up For Phase Two Of The New Jersey Charter Circus!!

Step right up ladies and gentlemen!

The NJDOE announced yesterday which charter applications will move on in the application process! Thirteen have been invited to submit Phase Two applications in July, including the two I wrote about back in April.

It's no big secret that if you have connections in this state, you are almost guaranteed a charter. To hell with the traditional public schools! New Jersey needs innovation, and charters need autonomy to be innovative. But never fear, if a charter misuses that autonomy to fleece taxpayers and fail children, it will be shut down.

Whew. I know I feel much better, don't you?

And even if the NJDOE is out of control at least we still have a handful of legislators willing to stand up for traditional public schools. You know, the ones that serve ALL kids.

Here's a snippet from the Joint Committee on the Public Schools, when the Commissioner came before them to discuss the funding impact of charters on districts.


The only question I might have of you -- and it's not meant to be insolent or anything along those lines. I happen to support public education adamantly in the State of New Jersey, having been a product of that and being an educator for over 35 years.

I don't have any fault with your idea of competition, but I must question the fact that if the public schools have had the autonomy and the less of a stranglehold that the Department of Education has exerted over them over the years, we, too, would have been as creative, as innovative as the charter schools are permitted to be.

Choice is a wonderful thing, but I think you're saying the parents know the best. This is just a prelude to vouchers. Soon we will just give the parents a voucher and go to any school you want. And is that really the goal of public education?

You can make the public schools a lot better if we had that same kind of latitude that you are giving to the charter schools. And I think that had we had the opportunity to be that innovative or that creative with the same option of selecting students to go here or there -- a lottery-- The public schools open their doors. The kids come in the way they are. They are given a responsibility that no one else has to do. We have to take the child that we are given. That's my only concern about the charter schools. And I am very concerned about taking the public's money into these charter schools. That's the only thing. Because I think we're having enough problems funding the public schools at the level we should be doing, and I think we need to address that issue, also. That's just my opinion. (emphasis mine)

What happened?  How did Luongo go from staunch defender of the public schools to charter entrepreneur?

By way of federal prison.

In November 2001, he pleaded guilty to taking nearly $36,000 from his campaign fund and a township charity for his personal use, including vacation rentals, family dinners, and home cable service. Five months later, a federal judge sentenced Luongo to 13 months in prison on mail fraud and other charges.
After spending nearly a year in a Florida federal prison camp, he was released in May 2003 and returned to education. A year and a half ago, he said, he opened Academic Solutions Academy.
But a spokeswoman for the Broward County School District, which approves charter schools there, said the school did not open for the 2012-13 academic year because it did not provide a certificate of occupancy on time. Moreover, said spokeswoman Tracy Clark, Luongo is not a founder of the school or a member of its governing board.
Asked by The Inquirer about the discrepancy, Luongo said he had sent a letter to the district threatening legal action if it did not recognize him as a legitimate partner in the project.
Luongo said he wanted to build charter schools in several states to cement his legacy.
He is barred from teaching in New Jersey. In 2007, the state Department of Education's Board of Examiners, citing his guilty plea, revoked Luongo's licenses as a teacher, principal, and school business administrator.
As president of Creative Visions Charter School Inc., Luongo said, he would also market the school in Pennsylvania, Delaware, Maryland, and other states, and would not be involved in day-to-day operations.
"I really believe I want to leave something significant that I can put my imprint on," Luongo, who now lives in Pompano Beach, Fla., said in an interview. "I feel like education is where I belong." (emphasis mine)

So Luongo's been barred from being a teacher or an administrator in the public schools because he pled guilty to embezzling both campaign and charitable funds. I can totally empathize with the fact that the guy has served his time, and feels like education is where he belongs, but giving him a charter school would be insane.

Perhaps to stem the tide of doubt, Luongo claimed he'd already opened a charter in Florida.  See, Florida saw fit to give him a charter, why not his home state of New Jersey? Because the Public Information Officer for the prospective district of the still unopened charter says he wasn't actually one of the founders.

Is this really what the NJDOE means when they talk about "increased autonomy?" If you lose your license to work in NJ public schools you can just claim to be a founder of a charter in another state and then open one in New Jersey to "cement your legacy?"

I thought this was about the kids???

Pastor McDuffie has a background in education, too.

Well, sort of.  He runs something called the School of intensified training and understanding (SITU).  SITU offers classes and instructional DVD's on a wide range of, ahem, very interesting and unusual topics... 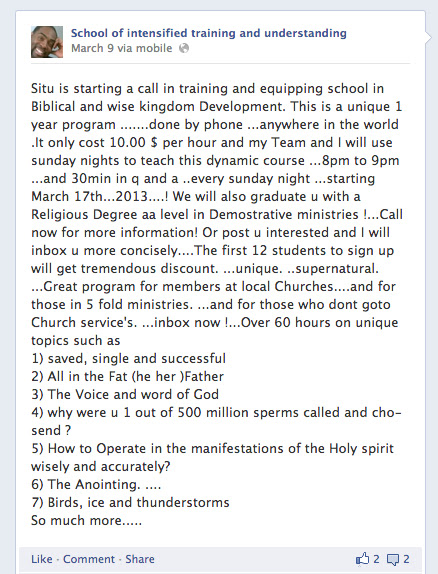 I seriously am at a loss. How is someone who runs a unique... supernatural... "training and equipping school in Biblical and wise kingdom development" (notice the same word salad feel - another 10 bucks to anyone who can translate this) qualified to run a charter school with PUBLIC TAXPAYER DOLLARS???

Is THIS what we can expect to see MIGHT Charter School teaching Paterson's children?

"why were u 1 out of 500 million sperms called and chosend?"

Nice work Commissioner Cerf.  You've officially proven that the NJDOE Office of Charter Schools is a complete and utter circus.
Posted by Mother Crusader at 11:09 AM