Well folks, it's getting close to that time of year again, when almighty Education Commissioner Chris Cerf decides which charters get to play in the big leagues and which need to sit back down on the bench for another year. One that was benched last year but is hoping to come up to the plate in September is K12 Inc.'s New Jersey Virtual Academy Charter School (NJVACS).

I've written extensively about what a disaster K12 Inc. is here, here, here and here.  Highlights include K12 Inc. CEO Ron Packard making over 5 million dollars in 2011, Packard's friends and allies selling virtual learning to the NJ Legislature and K12 Inc. potentially getting paid over $5,500 more to virtually educate kids in NJ than they get to virtually educate kids in Arizona.

K12 Inc. is running into trouble getting it's doors open in states like Maine and North Carolina, and K12 Inc. disasters keep piling up in state after state.  The Atlanta Journal-Constitution has done some great stories on K12 Inc. and problems not only at the Georgia Cyber Academy, but other K12 Inc. virtuals around the country as well.

The last time we discussed Georgia Cyber Academy was in response to parent comments about their significant roles as academic coaches under the online school’s instructional model.
Now, it is the state board of education discussing the state’s first online school, suggesting it will pull its charter if it does not improve services for students with disabilities.
Georgia Cyber Academy is part of K12 Inc., a for-profit company that is the nation’s largest virtual school provider with online public schools in 30 states.
The charter school’s parent company has been garnering headlines lately, many of which have not been flattering, including a scathing investigation by The New York Times.
A report released this summer by the National Education Policy Center found that less than 28 percent of K12-run schools were meeting Adequate Yearly Progress during the 2010-11 school year, compared with 52 percent of brick-and-mortar schools nationwide. Georgia Cyber also did not make AYP in 2010-2011
K12 refuted the center report in a lengthy statement.
In the last three months, the company has come under fire in several states, including Florida where the state education department is investigating after several K12 teachers refused to sign class rosters showing students the teachers had never taught.
The Florida Center for Investigative Reporting/StateImpact Florida reported: K12 officials asked state-certified teachers to sign class rosters that included students they hadn’t taught, according to documents that are part of the investigation.In one case, a K12 manager instructed a certified teacher to sign a class roster of more than 100 students. She only recognized seven names on that list. “I cannot sign off on students who are not my actual students,” K12 teacher Amy Capelle wrote to her supervisor. “It is not ethical to submit records to the district that are inaccurate.” The documents suggest K12 may be using uncertified teachers in violation of state law.
In Tennessee, state education commissioner Kevin Huffman said in September that student performance at the K12 Inc.-managed Tennessee Virtual Academy was “demonstrably poor.”

K12 Inc. is doing such a bang up job in other states how could Cerf NOT let them open up in New Jersey, right?

NJVACS is looking to serve 850 kids statewide in its first year. For the privilege of joining the growing number of states that have become disillusioned with K12 Inc.'s offerings, the taxpayers of New Jersey will have to pay an astounding $10,820,669. Where is that money going to come from?  Well, some of it could come straight out of your district's budget.  If kids from your district enroll, the money comes from your bottom line. And at $10,820,669 for 850 students, that's a per pupil cost of $12,730.

For a VIRTUAL education.

I'll give you a moment to let that sink in. 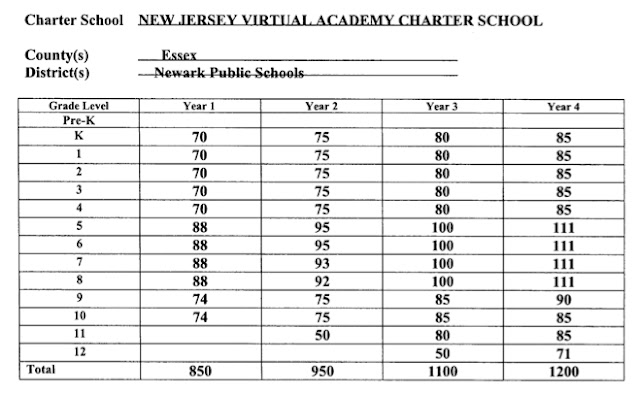 And that doesn't mean they'd stop at 1,200. The Georgia Cyber Academy mentioned above has 6,545 kids enrolled.

Go ahead, take another moment.

Now that you have a firm sense of what kind of money we could be looking at for what has been shown in other states to be an entirely ineffective educational option, let's look and see which districts the kids may come from.  I received this document last year via the Open Public Records Act (OPRA).  I was curious which and how many districts would be impacted by NJVACS. And boy was I surprised by how many districts will potentially take a hit.

(Please note, this was the initial enrollment information for the 2012-2013 school year.  Since Commissioner Cerf was pressured into not allowing NJVACS to open this year, the districts and numbers may look quite different for next year.  I am posting this merely to give a sense of how many districts could be impacted.)

Kind of shocking how many districts could be sending kids, don't you think?  And how many may potentially enroll from certain districts, too.

Like poor Teaneck. They fought successfully to get out from under the Garden State Virtual Charter School, and now they could get stuck with a $178,000 bill for 14 kids to go to NJVACS. My neighbors in Edison, after helping my district to successfully fend off Tikun Olam, may have to fork out $152,760. And my friends in Cherry Hill could see more kids (and money - $127,300 for 10 kids) go to NJVACS than ever enrolled in Amir Khan's ill fated Regis Academy.

Scroll through the list to see what your district could lose. And keep in mind, this is just Year 1.

If there is one thing I have learned since being dragged into the world of public education advocacy, it's that often people only get involved in an issue when it comes knocking on their door.

But K12 Inc. has already canvassed the entire state, most of us just don't know it yet.

That's why it's important for me to post this document, and for you to share it with your friends.  Let them know that a bunch of well connected Wall Street savvy entrepreneurs, posing as educators, have figured out how to stuff tax dollars intended to educate our children into their own coffers.

And they're providing virtually nothing in return.

Posted by Mother Crusader at 1:31 AM