We Need To Get Rid Of The Political Bosses, Don't You Agree With Me?

George's brother Donald was the chief architect of the The Urban Hope Act.   The legislation was enacted with lightening speed, but before it was passed or signed George was already openly talking about his plans.

Norcross said ideally his proposal would be built on the Lanning Square site next to Cooper, long eyed for a new school through the state's court-ordered school construction program but stalled now under the Schools Development Authority.

"Lanning Square would bring us the most pride, right in our backyard," he said.

Activists like MoNeke Ragsdale and Gary Frazier have been working tirelessly to get Lanning Square school rebuilt as a traditional public school, and I'm proud to have been witness to their fight.  Going up against the likes of Norcross and Christie is formidable, and they showed no fear.

Despite their best efforts, Lanning Square will have Norcross' name plastered all over it.

How did this happen?

Under Christie, the School Development Authority has all but come to a standstill.  The Star Ledger editorial board board, in a Twister worthy bit of logic, cited this fact as a reason the Urban Hope Act was "worth a try."

The first priority is to build new schools. Because these kids haven’t had anything new for a while, thanks to lethargy and foot-dragging by the Christie administration on urban school construction.

The state has yet to start building any of the new schools it promised. The pace of the work, which always has been slow, has frozen over.

But of course, they couldn't restrain themselves and added:


But it’s not just school buildings that are needed. The instructional programs in the Camden schools are disastrous failures, too.


Let's just ignore that KIPP abandoned the Freedom Academy in Camden and fled the city.

Lets just ignore that the CREDO study showed that after 15 years of the charter experiment in Camden there have been NO GAINS for Camden students.  In fact, according to a supplementary document released to me by CREDO (after I questioned their conclusion that students in "major cities" in NJ faired better in charters than in traditional public schools) not only were there no gains, the charter kids in Camden LOST GROUND in reading.

Here is what the supplemental document said:

Got that?  After 15 years, nada.  No gains for charter students in Camden.

Yet this study is being billed as proof positive that charters serve kids better.  Read the "if not so frightening it would be hysterical" statement of the New Jersey Charter Schools Association's Carlos Perez.

The CREDO report highlights the academic success of charter school students and demonstrates that upon enrolling in a charter, a student’s academic performance significantly improves. Parents and students in New Jersey’s communities have known for years that charters change lives, a reality further substantiated by this report."

"Though the report highlights the learning gains of charter school students, especially those in failing districts, more must be done to strengthen charter policy in New Jersey. Every child in New Jersey deserves a great education and the opportunity to attend a high-quality public school that is right for them. With 20,000 students on wait lists to attend charters, now is the time to do more for those families." (emphasis mine)


I'm sorry, what?  Did we read the same report Carlos?  The report I read said that almost ALL of the gains were in Newark, and Newark alone.  And when I challenged CREDO on their claims that statewide urban students showed gains, they coughed up the city by city breakdown.

It's enough to make a person cynical. (More about why they may have come to such bogus conclusions later...)

For now, back to how good it is to be George Norcross.  Doesn't matter if KIPP didn't cut it in Camden once before or if charters overall in Camden show no gains.

"I think you'll see the administration moving quickly on these projects," he said.


Many of the Senators who voted for the legislation did so because they thought the bill would rely on LOCAL CONTROL as the mechanism which decided whether projects would move forward (or at least that's what they said at the time...)


“It’s permissive and not mandatory, secondly, and most importantly, this bill gives local control and input into this bill, and that local control is binding,” said state Sen. Nia Gill (D-34).

Only two months after the Camden school board exercised local control and rejected all five Urban Hope Act proposals, only Norcross' came back for a second vote, ultimately winning approval.


Brown, who earlier voted against the KIPP proposal, said he switched because he believed the state would never build the long-promised Lanning Square public school. The state "will do whatever they can so it doesn't happen," he said. "And they have the power."

Board President Kathryn Blackshear said she was voting in favor of the KIPP proposal because "I know this school board will never have money to build a Lanning Square school."

Some in the audience then started shouting in protest. (emphasis mine)

Make no mistake, this was a systematic dismantling of local control from start to finish.

Watch Senator Dick Codey.  He explains why this happened.

Sorry silly parents, George Norcross wanted your school so he got your school.

Local control be damned, results be damned, and really, come to think of it parents, students and educators be damned. 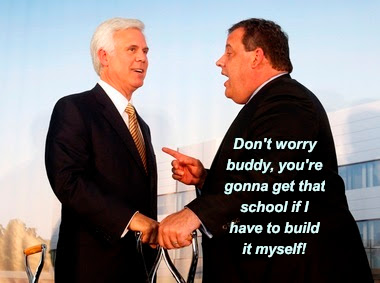 Posted by Mother Crusader at 11:02 AM