Smarick Says It Simply; Chartering Can Replace The District. But Can It?

My blogging buddy Jersey Jazzman has already done a fantastic job skewering Andy Smarick's Ouija Board fantasy of a chartery future for Newark.


Said simply, chartering can replace the district. And it can happen in Newark.

Well, can't get much more blunt than that.  Kudos to Smarick for just coming right on out and saying what it seems like the NJDOE really wants.  Urban districts overrun with charters, with districts obsolete.

But before we hand the keys to the Newark Public Schools to charter operators, let's take a look at the picture that accompanied Smarick's piece. 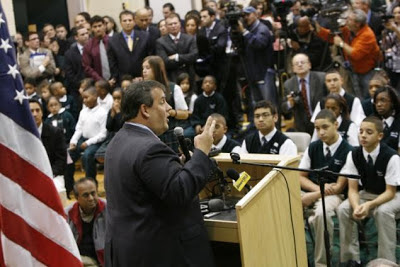 Now where have I seen this picture before??

OH RIGHT!  In this article about Christie visiting Newark's Robert Treat Academy just one day after being elected Governor.


"As I traveled all around the state, campaigning for governor there was only one school I talked about more than any other school in New Jersey," Christie told the students. "I wanted for every child in the state, to get an education like all of you are getting."

But Christie has been silent about the Robert Treat Academy cheating scandal that broke earlier this month.  Even the typically understated John Mooney called it a "black eye" for the often touted charter.

The report is a humdinger.  Peruse it if you have the time.  It's chock full of goodies like the School Test Coordinator not having a key to the conference room where test booklets were kept, VP Theresa Abudato (who had a key) signing the name of Principal Michael Pallante (who had a key) on Security Checklists, and staff joking that Pallante, Abudato and others were in the conference room for hours "going over the test booklets to make sure the students did well."

The Robert Treat statement claims that a test strategy was employed where students were encouraged to fill in the two best answers and then erase one, which lead to the high erasure rate.  Except there were discrepancies amongst teachers interviewed as to whether kids were encouraged to do this in their test booklets or on their answer sheets, and the two students interviewed by investigators BOTH stated they were not taught this strategy.

So as Christie "travels around the state campaigning for Governor" between now and 2013, (as of today, he is officially running for reelection) it's doubtful he will continue to sing the praises of Robert Treat.

It also seems doubtful that even Christie is brazen enough to campaign on Smarick's vision of a ticking clock counting down to the end of traditional public schools in Newark.


Today, this district has everything it could ask for: a reform-oriented teachers contract, a new state law on tenure and evaluation, funding twice the national average, the $100 million Mark Zuckerberg donation, partnerships with leading nonprofit organizations, freedom from a politically motivated school board, a tough local superintendent, a reform-friendly mayor, the nation’s best state superintendent and an incomparably bold governor.

So we should happily call this the beginning of a new era. But we must also declare an end to the excuses. If the district can’t generate better results here and now, it never will. The governor should say so — and then put the district on the clock. (emphasis mine)


Smarick should consult his Oujia Board about the 2013 gubernatorial race before he starts that clock.  'Reform friendly' Newark Mayor Cory Booker seems to be the candidate everyone hopes to see challenge 'incomparably bold governor' Christie.

If Christie and Booker end up head to head in 2013, Smarick's reformy vision for Newark, far fetched to begin with, would seem to be DOA.

ADDING:
I was looking at Christie's poll numbers this morning (after a friend on Facebook noted his high approval rating as he announced his re-election bid).  Just two years into his first term Christie's popularity tumbled, with 47% disapproving of the job he was doing and only 44% approving.

"Gov. Christie is having a big problem with women, perhaps because they care more about schools and disapprove, 60 to 34 percent, of the way he's handling education," Maurice Carroll, director of the Quinnipiac University Polling Institute, said in a statement released with the survey results. "But voters like their 'Jersey guy' governor better as a person than they like his policies. Men like him a lot; women, not so much." (emphasis mine)

Christie needs to ratchet down his aggressive education agenda if he wants to stay in the good graces of the women in this state and maintain his office. Heeding Smarick's advice and eradicating public education as we know it could spell disaster for Christie in 2013.
Posted by Mother Crusader at 12:04 AM