GUEST POST: So, Does The Opt-Out Movement REALLY Have A Race Problem?

I could not be more thrilled to host a guest post from the amazing Sue Altman. Fans of Jennifer Berkshire's may recall Sue's guest posts over at Jennifer's blog, Edushyster. (see here and here)

Follow along as Sue masterfully flips the script back on Pondiscio. 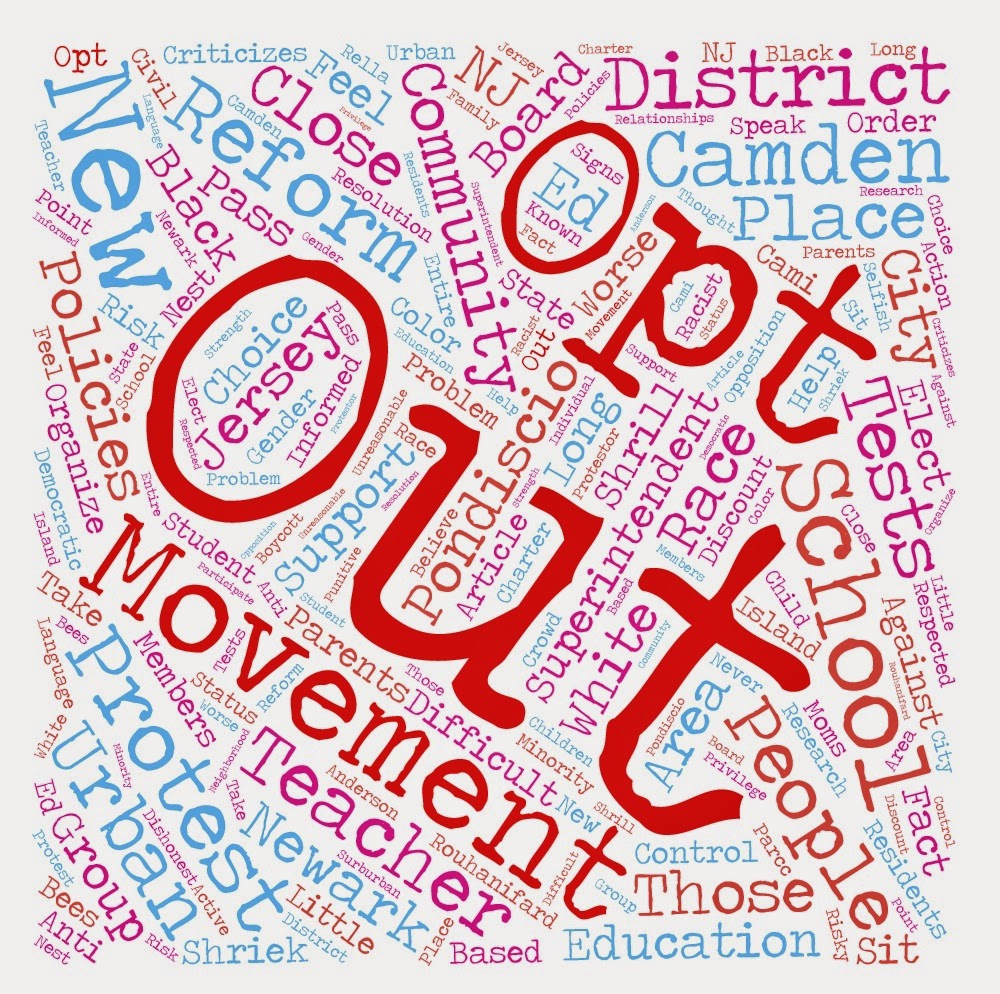 Robert Pondiscio's article, Opting Out, Race and Reform, is another example that tried and true practice of lumping people into a group and discounting what they say because of who they are. And worse, Pondiscio has not done his research. For an opt-out movement to catch on, certain criteria must be in place— things like democratically elected school boards, open-minded and respectful superintendents, and teachers with job security. But, by design, these things have been removed, systematically, from urban communities, so that policies can be put in place that community members (mostly African-American or Hispanic) have no say in. So, I have news for Pondiscio— it’s not the opt out movement who has a race problem.

In New Jersey, unfortunately, discounting people based on a gender or racial stereotype is always easy money. A total layup. The Star Ledger did it back in 2013 in an editorial about protests in Newark:


Cami Anderson, the superintendent of schools in Newark... is facing the predictable shrieks of protest from the defenders of the status quo.


much of ​(Cami Anderson's) opposition is shrill and unreasonable.


None of these reforms is guaranteed to succeed. But it is sensible to lean on the best charter schools for help, give principals control over their staffs and make sure each ward has plenty of school choices. If that stirs up a bees nest, then so be it.

As both Jersey Jazzman and Bob Braun ​have ​pointed out, the language here— Shrieks, shrill, unreasonable, bees nest—have uncomfortably racist undertones. The strength of these words for those who wield them is that it means that whatever these “shrill, shriek” protestors say is not to be taken seriously.

While Pondiscio’s article is commenting on the relative privilege of an entire group of organized, committed and well-informed parents (and this is a far cry from the much worse crime of racist language), he shrugs off their message because they are “white surburban moms” whose own selfishness is preventing poor and minority children of “benefiting” from testing. If you disagree with ed reform, you are either a shrill and shriek uneducated minority, or a whiny, selfish, white woman. When it comes to criticizing ed reform, you can’t win.

But, even more frustrating and misleading, he bases this conclusion on assumptions that are patently false, skewed, and ignore reality. People of all shades, genders and economic status have participated in these protests, whether they are opt-outs or other forms of civil disobedience. As Belinda Edmondson ​writes:

I thought Montclair was full of black people. Active, vocal, black people. Brown people too. I thought I was black. So did my children, who had no idea they are white—or rich (yay!). But these are the facts about New Jersey, according to the reformers: only wealthy white liberals are opting out of PARCC.


The reformers should have notified the large multiracial group of opting-out students who crowded into Montclair school auditoriums during PARCC testing that opting-out is a whites-only privilege. They should have informed the protesting black and brown students who took over the Newark schools superintendent’s office that they are the wrong color. They should take aside those outspoken black parents at the Newark Board of Education meetings and minority anti-reform groups like the New York City Coalition for Educational Justice, and let them know: these are not the actions of black people. Stay in your lane, already

Further, if we look at the individual cities Pondiscio mentions, we see that, in fact, plenty of protests have occurred by community members in those communities. They might always not be opt-outs, but urban communities have made their disgust with these policies known.​

To pretend otherwise is blatantly dishonest.​

As someone who has studied the opt-out movement in New York, I believe that opt-outs have a place in the protestor's toolbox; but so do old fashioned walk-outs, demonstrations and sit-ins.

This past year, many urban communities in NJ have come together to protest with great voracity. Ms. Edmondson mentions the student protests in Newark. A shining example. She could have also mentioned this notable opt-out in Paterson, these protests in Newark over privatization, or the student-walk outs in Camden. If the community in these cities chooses other forms of protests instead of opt-outs, let’s believe that they have assessed the situation and executed their best strategy.

​Foundations of the Opt Out Movement​


Opt-outers everywhere feel they are taking a risk in order to participate in this form of protest- it is stressful, it feels risky, it involves their child, and there are a lot of unknowns around punitive measures that might be taken against them. So, often, a strong opt-out movement requires a certain pre-existing set of community criteria that must be met so that those risks are mitigated. Only then do people feel comfortable joining, and only then can the opt-out movement spread in an area. So what, then, helps an opt out movement prosper? And why would an opt-out movement struggle to gain a foothold in an urban city in NJ? I’ll use Camden as an example since it is the city I am most familiar with.

First, the opt-out movement is boosted tremendously in an area if the district superintendent is supportive. Long Island superintendent Dr. Joseph Rella was an early supporter of the opt-out in his home district. Dr. Rella stands firm in his support of the choices of parents in his community, even as he is pressured by the NYS DOE to do otherwise. Accordingly, his district had a high opt-out rate. Other superintendents have followed his lead in New York, and recently over 100 superintendents have signed a letter of protest against high-stakes testing. When superintendents speak out, parents are empowered to actively refuse tests.

​And of course, in Camden, Superintendent support will never happen.

Superintendent Paymon​ Rouhanifard is in the “in crowd;" handpicked by Cerf and Christie to run this state-controlled district in an area known for its Democratic boss control. Rouhanifard would never bite the hand that feeds him. Unless he was abudcted by aliens and given a brain transplant, there is no way Rouhanifard would ever, ever be supportive of any kind of testing boycott in his district. In fact, all signs point to his taking punitive action against residents. Faux-Choice in Camden exists only in the form of closing neighborhood and forcing charter schools down residents’ throats-- not actual, messy democracy​.​

Second, teacher support and teacher connection to community is key— and these are precisely the relationships most disrupted by ed reform policies in Camden. Many members of the opt-out leadership team on Long Island have close friends or family members who are teachers. Many “white surburban moms” in Long Island first found out about the testing madness informally, while chatting with teachers who are also members of their community. In Long Island this winter, Beth Diminio, a brave teacher from Comsewogue announced she would be the first teacher to opt-out of administering tests, bringing additional energy to the movement. When trusted, highly-respected teachers say that the tests have little value, parents listen.

Meanwhile in Camden… teaching is already very much a tenuous job, with layoffs, cuts, and school closures happening right on schedule. And, in New Jersey, the people who are hurt most by the closings are, overwhelmingly, educators of color. As Jersey Jazzman put it, "There is a history of discrimination against teachers of color in "choice" plans, and NPS, if it goes through with One Newark, may be susceptible to a legal challenge under civil rights laws.” When teachers are being fired in droves, it becomes pretty difficult to speak up- another good reason opting out ​feels like a more risky path for urban residents​

If you were a teacher in Camden or Newark and you felt the target on your back, would you stick your neck out to support an opt-out movement? I would sure think twice.

Third, local town Board of Educations have been powerful supporters of opt-out policies at the district level in New York, something that is made nearly impossible in Camden. Many districts in NY have passed “testing resolutions” as a way to legitimize opting out, and groups have pushed for anti sit-and-stare policies in their individual districts. Further, opt-out grassroots groups in NY have organized to elect sympathetic Board of Education candidates in districts in order to have these voices heard on the BOE level. Then, when opt-out supportive resolutions pass, people in those communities feel comfortable that their Board of Education supports them in philosophy. In Camden, however, the BOE is not elected and is a puppet of the district, which is controlled by the State.​

It is highly unlikely they would ever pass a resolution that stands in opposition to the party line. Fortunately, in New Jersey, Save our Schools NJ is working to pass anti-sit and stare resolution at the state level, the first step of which has just passed unanimously.

And finally, the closing of schools and the reshuffling of residents creates an environment that makes it very, very difficult to organize. If you sent your child to a school for six years, and then that school closed and you were forcibly moved to a different school in a different neighborhood— it would be much more difficult to forge the type of relationships that lubricate community organizing efforts. I hope that outcome is not one that is part of the grand ed reform plan, but if closing schools and shuffling families around makes it harder for them to organize against the reforms, I’m sure that will suit the district just fine.

So, before Pondiscio criticizes residents of Camden and other urban areas for not being part of the opt-out movement (or, criticizes the opt-out movement for not including the urban districts) it might be wise of him do a little research, and think more broadly, more contextually about why opt-out might have trouble gaining traction in an urban area in NJ, in favor of other forms of protest​.

Opting out is perceived as a personal risk, requires strength in numbers, and a great deal of mechanisms in place— most of which are extremely difficult to obtain in these cities. Difficult because of policies that have been put in place by a state government that seems to care very little about the choices of urban residents, despite their hypocritical rhetoric. Difficult because schools have closed and churn has occurred, and difficult because trusted teachers have and will be fired.

To accuse the opt-out movement of having a race problem is to miss the issue entirely, and to discount all other forms of protest in urban areas is dishonest and inaccurate. 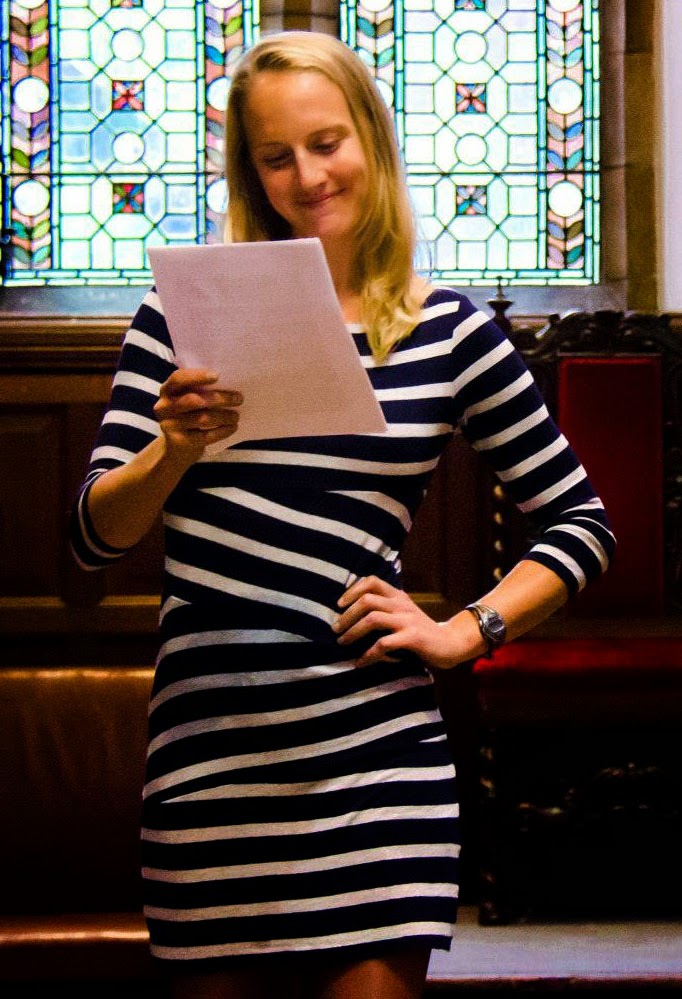 Sue Altman is a proud product of New Jersey's public schools. At the University of Oxford, UK, Sue received a dual degree in International and Comparative Education and her MBA. Her MBA thesis focused on evaluating the the opt-out movement as a market-response boycott.  She is currently an administrator at an independent school.
Posted by Mother Crusader at 3:43 PM