We All Stand Together! Statewide Advocates Turn Out To Support Newark Public Schools

It was a great honor to participate in yesterday's NJ Ed March, which brought together education advocates from all over the state, a fact the Star-Ledger failed to mention, instead choosing only to report that "(s)everal hundred Newark parents, teachers, students and community activists rallied in Trenton." The event was intended to highlight the resistance to the haphazard One Newark plan, to lend support to those pushing back against Cami Anderson and Chris Christie, and to bring the message directly to Trenton.

Hundreds heeded the call on a blustery, cold, not-very-Spring-like day. The districts I personally saw represented were too numerous to list, but included both urban and suburban districts from all corners of the state, from District Factor Group A to I. The Ledger's failure to report this part of the story is, quite frankly, irresponsible.


I want to tell you a story about why it was so important to me to be there to support the people of Newark as they fight back against the top-down edict that is One Newark.

Back in 2012 my district was riding high after putting the brakes on a charter that seemed destined to open its doors. The charter would have decimated our small budget, but the application had the support of the USDOE in the form of a $600,000 federal grant. My community staged a massive pushback campaign, including a Town Hall style meeting and a subsequent Occupy the DOE event when NJDOE staff, including then Commissioner Cerf, refused to participate in our Town Hall. We got tons of state, local and even national press coverage, which put much needed pressure in all the right places. Without the publicity drawing attention to our plight the outcry of my community was being ignored by the NJDOE.

After it was all over and the application was denied for the final time I was still hooked. I kept blogging, I kept advocating; the immediate threat to my district may have been over but the education reform threat was still very real all across New Jersey. I felt obligated to use what I had learned to help other communities and to lend my voice to the fight.

In May of 2012 I was asked to participate in an Education Law Center panel with Diane Ravitch, entitled "What is School Reform?" I was gobsmacked to be there with Diane. After her lecture came our panel, followed by questions and answers from the audience.

And I'll never forget who stood up and asked a question, directed at me. It was Antoinette Baskerville-Richardson, the now President of the Newark School Advisory Board.

Her question was polite but firm. I don't remember her exact words, but the gist of her question has stuck with me for the last two years. Antoinette congratulated me on how successful my community and other communities like mine had been in pushing back against reforms like charter schools, and on all the media coverage we had gotten, but she wanted to know why Newark wasn't getting the same kind of coverage for the travesty unfolding in that city. 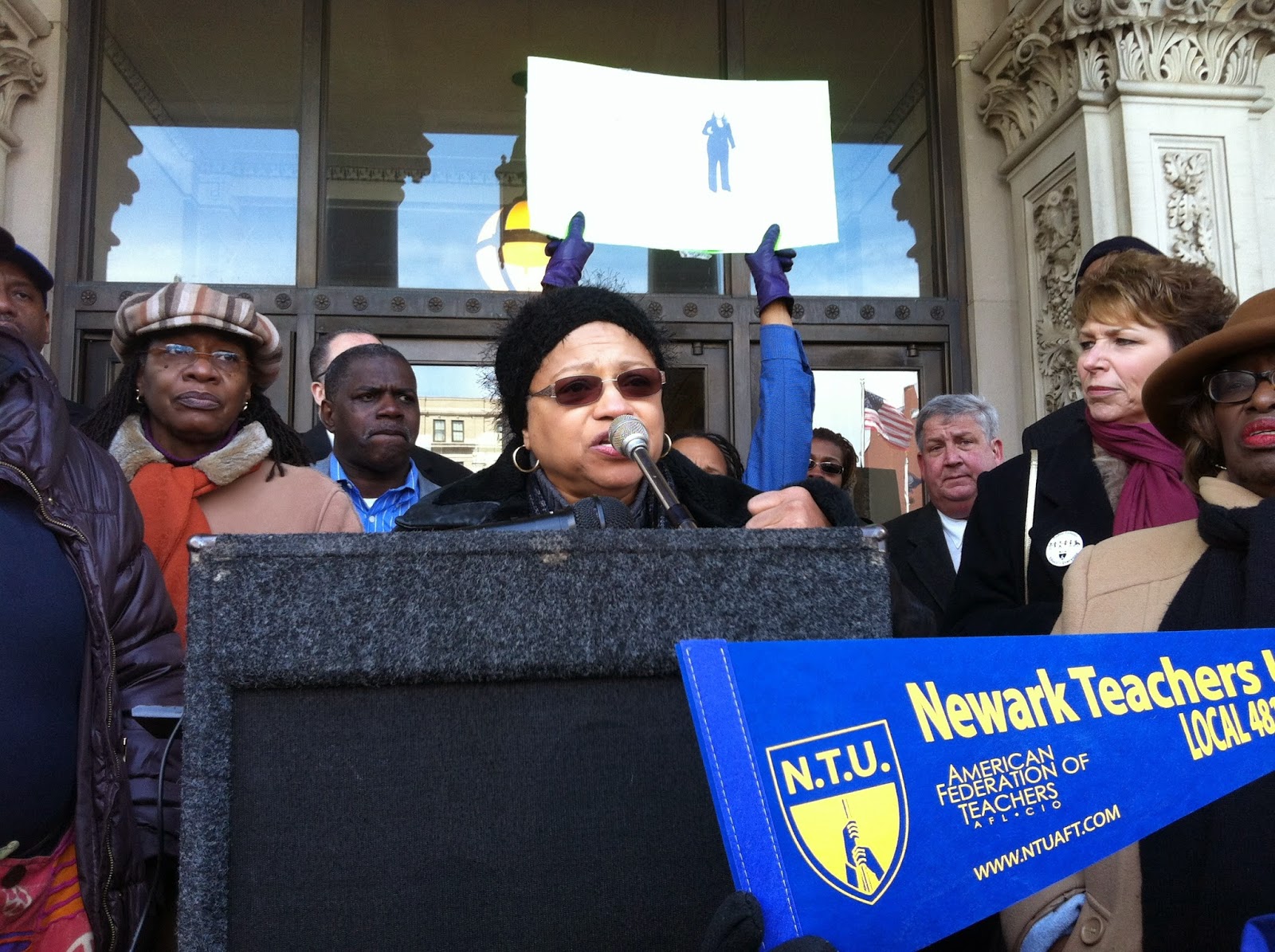 I honestly have no idea what I said. What could I say, really? She was totally right, and her question so perfectly highlighted the inequities embedded in this state. Wealthier suburbs with access to the media and the legislature able to effect change, and poorer urban districts experimented on and all but voiceless.

Finally the state and national spotlight is squarely on Newark, and it's not looking good for beleaguered state appointed Superintendent Cami Anderson and her One Newark Plan. Listen to the speeches Antoinette and mayoral hopeful Ras Baraka delivered yesterday. They were filled with passion for and commitment to the public schools in Newark, the students and parents who rely on them, and the teachers and staff who work in them.

Not only because she disrespects us, but because we have something valuable to say. You can not hate me and love my child. That is impossible. And we must have local control now. Not in a couple of years when there are only 10 or 15 schools left, we must have it now.

If Cami Anderson gets away with her One Newark Plan, and we will not let her, because if she does it will be One Paterson, One Jersey City, One Montclair, One New Brunswick, One Perth Amboy, One Highland Park, One Princeton and we will not let that private mess happen all over this country.

That's what is sounds like to me too, Ras and it breaks my heart for the people of Newark. And in case you think Ras is exaggerating the threat to the Newark public schools for effect, allow me to remind you of the words of former NJDOE Deputy Commissioner Andy Smarick. What happens when Smarick's dreams come true?


Said simply, chartering can replace the district. And it can happen in Newark.

Charters already have a 17% market share in Newark. Extremely successful charter networks like KIPP and Uncommon Schools operate in the city, and they are prepared to expand. The district has numerous under-enrolled buildings, meaning charters have space to grow.

Since the state has complete control of the district and the state Education Department is New Jersey’s lone charter authorizer, the state, at the governor’s direction, could lead the transition from a district-based to a charter-based system. (emphasis mine)

What say you parents of New Jersey? Do you want the state and this governor to have "complete control" over your schools? How much "market share" are you willing to give up to privately managed, publicly funded charters in your district? 17%? 50%? 100%?

Really think about your answer. Are you willing to give up "complete control" over the governance of the schools in your district?

If you are not willing to hand the schools and children in your community over to the state and charter operators that demonstrate time and time again that they are not truly public schools, why would you sit back and let it happen in Newark? Because as Antoinette so rightly points out, today One Newark, tomorrow One Princeton.

It was a question very like those above that chased Cami Anderson away from public school board meetings. It was the unforgettable moment when Natasha Allen, the parent of a Newark public school student, asked Anderson, “Do you not want for your brown babies what we want for ours?”

Allen said afterward Anderson “attacked” her child and all Newark children by requiring them to attend school in the midst of a snow emergency last week when all other schools in the county–including Newark’s charters–were closed. Allen also said Anderson’s school closing plan “will hurt children throughout the city–my child–because she is bulldozing their schools and their neighborhoods.” Allen said she was upset by Anderson’s actons, as if the state official were “personally attacking my child.”
As Allen spoke,  Anderson gathered up papers in front of her and gestured toward her staff members sitting with her at a table on the stage and in the front row of the audience. She led the parade of central office staff from the stage to a rear entrance while the audience roared its approval and mockery of her leaving.

And Anderson has yet to return.

Natasha, I, and many others across this state, want the same for your brown babies that we want for all babies, brown or white, and I was proud to come to Trenton to help you fight for just that. We all stand together, and now that districts across the state are united and speaking with one voice on Newark's behalf, Christie and Anderson don't stand a chance.

Posted by Mother Crusader at 12:44 PM