FIX IT! Because This IS NOT How We Do Things In Highland Park. Here, We RESIST!

I've honestly never seen anything like what happened last night in my home town of Highland Park, New Jersey. 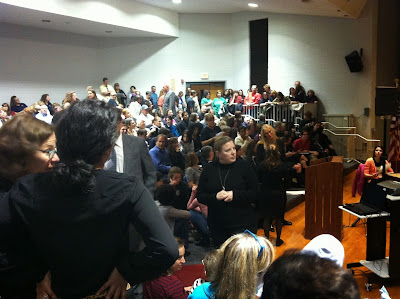 The school board and administration were literally surrounded by critics: So many people showed up that they had to take out a partition in the wall, doubling the size of the room and letting the overflow crowd tickle into the nosebleeds. (emphasis mine)

Yup, that's right. The Board, at the recommendation of our brand new Superintendent, approved a Reduction in Force (RIF) of nine district employees on November 4th, 2013. The RIF included the President and Vice-President of the Highland Park Education Association, and came after contract negotiations reached an impasse.  (Note: A tenth employee was RIFed on October 7th, 2013 but this position is often not added to the nine RIFed on 11/4)

I didn't get an exact count, but I'd estimate somewhere between 30-40 people came to the microphone to express their concern with the current direction of our district.


And after some brief introductory remarks, including a slideshow presentation defending the layoffs, board members and school administration mostly sat expressionless as speaker after speaker alleged that the move was tantamount to union-busting and that the superintendent has hired too many top administrators at the expense of front-line workers.

Almost everyone that spoke, save one lone voice of support for the Superintendent and the Board, expressed concern on a myriad of topics. The RIF was not the only issue. The creation of two new six figure Central Office positions, including a second Assistant Superintendent and a "Data Analyst," was a hot button topic.


"We now have almost as many superintendents as we do schools, and a data analyst to tell them how great of a job they're doing," said Samuel Shiffman, a teacher in South River whose three children attend Highland Park schools. 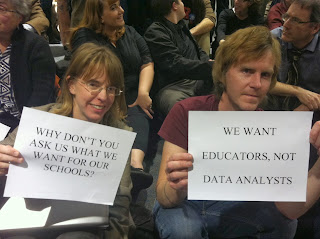 Superintendent Capone's qualifications for his current position were questioned throughout the evening.  Many wondered aloud if his lack of previous Central Office experience caused him to make hasty decisions in the first 50 days of his tenure that a more seasoned professional might have thought through more carefully. There were pointed comments made directly to Capone, some questioning if he is the right fit for a progressive district like Highland Park where there is deep support for our teachers and their union.

And then there was this.


Much of the dissatisfaction in the crowd surrounded Capone, who was hired in August (one speaker exuberantly called for Capone's resignation, pumping her fists to the raucous applause of the crowd).

The only chant of the evening emerged spontaneously from a direct plea to the Board to fix what they had done.

A single boisterous audience member cried out, "FIX IT!" And then another, and then another, until the entire audience began chanting and rhythmically clapping in unison. It was remarkably powerful and sent a clear message of defiance to the Board and their choice of Superintendent.

Capone was hired fresh out of one of the NJDOE's Broad funded Regional Achievement Centers.

This brief bio reveals that prior to being the Executive Director of the Region 4 RAC he was a "turnaround" principal at a Race to the Top school in Delaware.

Capone's history was deeply concerning to me as someone who has been immersed in the state and national debate over education reform and policy for more than two years. When Capone was hired I tried to keep an open mind, but I was nervous.

And now my community is nervous too.

So last night I felt obligated to stand up and try to make some kind of sense out of what's happening in our tiny town by putting recent events in Highland Park into the national context .

This is the speech I delivered at last night's meeting.

There is a simple explanation for why we are all here tonight. Highland Park is a town that prides itself on being progressive, on being inclusive, but most of all on being just and fair.

In just the last two years this town has tackled immigration issues, multiple development issues, and yes, even charter school issues.  We haven’t always agreed or been on the same side of these issues, and often partners in one cause are on opposite sides of another.

But all of these issues have been dealt with honesty, integrity and open discourse.

And this is why the current situation isn’t sitting well with so many people.

Where was the open discourse?  Why wasn’t the community notified there was a budget issue? Why weren’t we asked for our input? What other options did the board consider, if any, other than the now infamous Reduction in Force that cost 10 employees their jobs, including the President and Vice-President of the union, in the midst of stalled contract negotiations?

This is simply not how we do things in Highland Park.

I want to talk for just one minute about how a look at national education policy may help put our current dilemma into perspective.

The current narrative of what has been dubbed the “corporate education reform movement” is that public education is failing; therefore drastic steps must be taken to disrupt the “status quo.”

We’re told data-driven instruction will improve outcomes for all children, and put them on the path to college and career.

The corporate education reform movement is bi-partisan. President Obama’s Race to the Top has replaced President Bush’s failed No Child Left Behind. NCLB succeeded only in labeling nearly three-quarters of the nation’s schools as failures, and RttT has turned education funding into a competition where the strong get rewarded and the weak are starved of funds.

We live in a bizarre world where Governor Christie and President Obama advocate many of the same education policies. Perhaps the most destructive is the evaluation and ranking of teachers and schools according to faulty standardized testing data. Even if you don’t pay attention to education policy, as parents it is impossible for us to ignore the effect the current emphasis on standardized tests has had on our children.

Don’t be fooled - these tests are not for the betterment of our children. An over reliance on standardized testing and test prep sucks the joy out of school for our students, and the accountability measures attached to them are the stake in the heart of our teachers and schools.

Recently you may have heard rumors that our district is suddenly considered a “low performing” district.

Could things be better?  ALWAYS!

I highly doubt it.

We all must remember -- parents, teachers, students, residents and Board members alike; public education is NOT in crisis. Highland Park schools are NOT low performing, and they certainly are not failing.

We have a strong, diverse district with students, parents and teachers who CARE.

Again, simply stated, this is NOT how we do things in Highland Park.

Last night Highland Park did me proud. The eloquence, intelligence and passion in my town is humbling. One of the last speakers of the evening made perhaps the most salient point.

He urged the board to resist.

To resist the state and their policies that hurt our district. I think Highland Park proved last night, beyond a shadow of a doubt, that we are up to that challenge.
Posted by Mother Crusader at 5:02 PM