Here's something I've been chewing on that I'll just put out there, and let you guys make of it what you will.  I have been reading a lot about what my friend Jersey Jazzman is calling "The Newark Merit Pay Experiment."  If you haven't been keeping up, do yourself a favor and hop over there.  JJ is making some remarkable connections.

Some of the numbers are kind of startling. Lisa Fleisher at the Wall Street Journal reported that the total pool of money available for bonuses was $1.4 million for 3,200 Newark teachers.


About 5% of the 3,200-member teaching force got the money, one of the more contentious parts of the contract approved in November by the Newark Teachers Union. Seventeen teachers received the top bonus of $12,500.

That got me to thinking about our pals on Wall Street and their bonuses, so I did some quick digging.

(Here's where you're going to start getting really angry.  Just fair warning.)

Let's look at Goldman Sachs, since today my other education blogger friend EduShyster posted a link on Facebook to this Teach for America nugget:

Teach For America is Proud to Partner with Goldman Sachs
Joining Teach For America before pursuing a career in business will provide you with the management experience and skills that will help you have a greater impact in the business world. By committing two years to teach in a low-income community, you will have an unparalleled opportunity to assume tremendous responsibility—managing a classroom of students, setting ambitious goals, and inspiring your students to meet those goals. Through this experience, alumni say that they developed invaluable communication and time-management skills that are highly transferable to a career in business.

So clearly, these Goldman TFAers are NOT going into teaching for the long haul.  This is nothing but a stepping stone...

The Newark region currently has 95 TFA corps members, but one can assume that number will be rapidly increasing with the recent influx of $2 million to Newark TFA from the Walton Foundation "to bring effective teachers into some of the most under-resourced classrooms in the country while simultaneously working to develop more of our talented corps members as long-term champions of educational equity and excellence."

So which is it? Is the goal of TFA to develop "long-term champions of educational equity and excellence" or to be a springboard for eager Wall Streeters to develop "invaluable communication and time-management skills that are highly transferable to a career in business?"

But I digress... Back to Newark and merit pay.

As Newark teachers, Goldman Sachs bound TFAers can expect to compete with 3,200 other teachers for $1.4 million in bonuses. If that pool of money was divided evenly, it works out to $437.50 per teacher.

What can they expect when they ditch education and embark on their ultimate career at Goldman Sachs?


Last year, Goldman set aside $12.22 billion to pay compensation and benefits for its 33,300 employees. That total, which comes out to around $367,000 per person, may seem excessive.

MAY SEEM EXCESSIVE?!?!?! But wait, sorry, we're not at the totally infuriating part yet.


But consider: A large chunk of a Wall Street compensation pool typically goes to a relatively small number of top managers and executives, leaving less for entry and mid-level employees. And the firm’s compensation levels are well below those in 2010, when it set aside $15.38 billion, or $430,700 per employee.

Also consider: For any sad sacks at Goldman Sachs, it could be worse. They could be at Morgan Stanley.

So what was so awful at Morgan Stanley?


Goldman has not taken the drastic step of capping cash bonuses at $125,000, as Morgan Stanley has told its employees it intends to do this year.


Wall Street pros are well paid, the headline-grabbing traders and executives who make multimillion-dollar bonuses don't represent the typical worker. The average cash bonus for Wall Street pros in 2012 will rise 9% to $121,900.

All I can think is that Wall Street guys like Tepper who muck about in education policy and push for merit pay in New Jersey are laughing their asses off that meager $5,000 or even $12,500 bonuses compel teachers to do ANYTHING.

Just think about this for a minute, only SEVENTEEN teachers got the top bonus of $12,500 for being HIGHLY EFFECTIVE but the AVERAGE Wall Street schlub gets $121,900 JUST FOR SHOWING UP!

The pay gap between finance and other professions widened between the 1980s and 2006, exceeding the record set before the Great Depression, according to a 2009 study by Thomas Philippon, a professor at New York University’s Stern School of Business. After the 2008 financial crisis, Wall Street started paying a larger portion of bonuses in stock and restricted cash. Yet there’s little sign the gap with Main Street is narrowing.

“I don’t think it’s healthy for the economy to be this skewed,” said Stephen Rose, a 63-year-old professor at Georgetown University’s Center on Education and the Workforce. “I believe there’s some sort of connection between value added to the economy and pay. Everyone is losing sight of any fundamentals.” (emphasis mine)

I couldn't agree more with Professor Rose. Our economy is horrendously skewed. Wall Street adds very little value to our society, yet they make a fortune just for showing up. Teachers shape our children's future and are forced to compete with each other for scraps.

My sincere apologies if this made you as mad as it makes me. 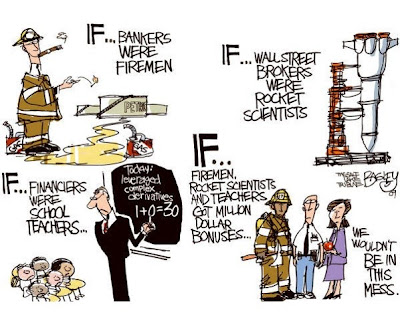 Posted by Mother Crusader at 12:17 AM