The Charter Circus Is Back In Town

New Jersey's last round of charter applications was a stealth affair. With no suburban applications, and no big controversies, nobody paid much attention.  Well, except me of course...

But mark my words, this round will be different.

The Courier Post has already picked up on the most obvious potentially controversial application.

A former Washington Township mayor who went to prison for federal crimes is among 38 applicants seeking to run a charter school in South Jersey.

Jerry Luongo is seeking approval for Creative Visions Charter School, which would initially serve about 140 students in grades 9 through 12.

He admitted in 2001 that he diverted $36,000 in campaign funds and charitable donations to his personal bank account, then served almost a year in a federal prison for mail fraud and income tax evasion.

Luongo wrote a book about his experiences in federal prison.  It has some very helpful, Ms. Manners-esque tips for those about the be incarcerated.

Looking at your first trip to prison? No need to fear. Take it from someone who knows.

Fresh from the slammer, Gerald J. Luongo seeks to assist white-collar convicts with a new book about life inside a federal prison camp.

A former New Jersey assemblyman and mayor of Washington Township, he tells it straight.

"There is absolutely no marching to your own drummer!" writes the man who was inmate 12776-050. "As much as it may annoy you, you are an inmate, a convicted felon. . . . Get over it and get with the program." (emphasis mine)


Hmm.  You can't work in a school if you are a convicted felon.  So how can you be the founder of a charter school?

The Courier Post pointed out that after his release Luongo moved to Pompano Beach, Florida, but they missed an important detail. He has approval for a charter school in Florida. The Academic Solutions Academy Charter High School.

The current status of this charter is totally unclear. While Broward County board minutes from 2012 indicate the charter received a $375,000 grant for "Planning, Design and Implementation" the charter is not on the districts list of charters. But Luongo started a wildly unsuccessful petition that makes it sound like something went awry, and his approval was revoked after he claims he had invested over $500,000 in "improvements of a facility, interior furnishings,computers, technolgy [sic], books, educational programs and other essentials" and signed a five year lease for $350,000.

I'll follow up and find out exactly what went down with Luongo's charter in Florida, but so far, it doesn't look pretty.

But Luongo's story may pale in comparison to an application submitted in Paterson. Remember the now infamous Paterson Town Hall where Governor Christie referred to Speaker Sheila Oliver as the "African-American female speaker of the Assembly?" It was the same Town Hall where Christie responded to an African American man who interrupted him by shouting, "Yeah, I hear ya, boy!"

But did you see THIS picture from the Paterson Town Hall? 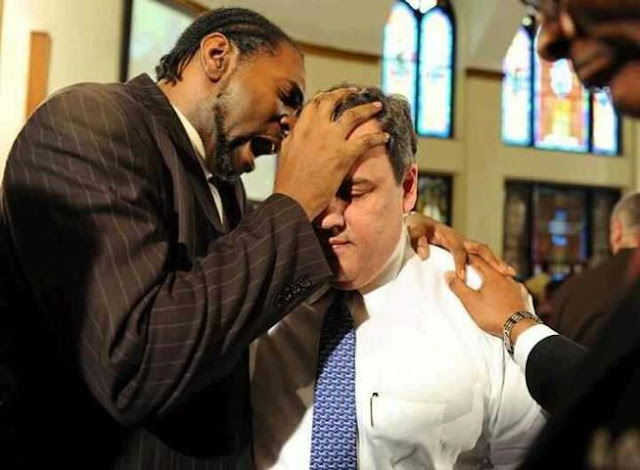 That's Pastor Michael McDuffie. Much like Pastor Amir Khan at the Voorhees Town Hall, McDuffie was sitting right behind Governor Christie at the Paterson Town Hall; one of only seven to make it onto the dais. 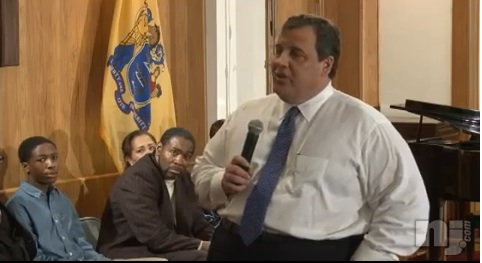 You see where I'm going with this, right?

What experience does McDuffie have that qualifies him to receive millions of our tax dollars to run a charter school?  His Facebook page, which is open to the public, raises some interesting concerns about what may be taught should he be given the green light to open a school.

His page reveals that he has already started a, for lack of a better word, business venture called the "School of intensified training and understanding" or SITU. 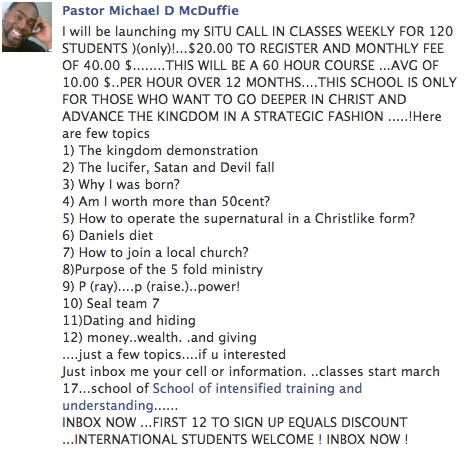 I couldn't make this stuff up if I tried...

And here's one last photo Pastor McDuffie posted of himself with the Governor, and the utterly bizarre description he posted along with it.

You can be sure I will be looking into whatever "influence" Pastor McDuffie may have on this "government" and why, once again, a seemingly controversial pastor has applied for a charter school in New Jersey.

The charter circus is back in town my friends...


Posted by Mother Crusader at 1:56 AM