After all, if he isn't in complete control of the district, how can he hand out charter schools to his buddies?

I have been following and writing about the Paterson Collegiate Academy Charter School Application for some time now, because as soon as I saw Steven Wilson I knew he was the kind of charter operator that would make Cerf go weak at the knees. Wilson came out of Edison Learning, just like Christie, Cerf and Evo Popoff (Cerf's new Chief Innovation Officer overseeing the Office of Charter Schools) but all I could do was speculate that these guys knew each other.

If you follow this blog at all, you know I am a big fan of the Open Public Records Act (OPRA) and regularly submit OPRA requests which reveal all kinds of interesting information. So the thought occurred to me to OPRA emails between Wilson and Cerf or any other employee of the NJDOE.

Turns out not only was I right, but Wilson and Cerf are chummy enough that Wilson emailed Cerf back in July 2012, three months before he submitted his application to the state, and the email went to Cerf's personal email address, not his public DOE address.  Clearly they know each other pretty darn well.

But what even I couldn't have imagined was that Cerf actually told Wilson he would "love" it if he would open schools in NJ.

After Wilson met with Cerf, but still before the October 15th application deadline, Popoff dropped Wilson an email to set up a phone call.  Clearly these guys knew each other, too.  And clearly Wilson was being pursued.  He was the belle of the ball.

You have to wonder, why bother with the artifice of having unconnected founders submit applications? Seems that if you know the Commissioner and his Chief Innovation Officer you not only get wooed to open a charter school, you get cash money to boot!  Wilson was the only applicant to receive a $150,000 planning year grant.

I checked with the OPRA custodian to see if this grant award had been "determined" yet, and sure enough, Wilson was the only one awarded the funds. 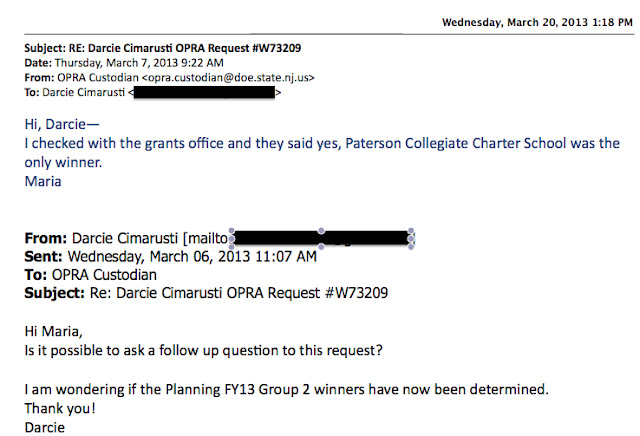 Notice in Wilson's original email to Cerf he says he's "working on more schools, building capacity, thinking about raising money (I think we're well positioned)..."  Wilson is crystal clear with Cerf that he is already "well positioned" to raise money on his own, yet the NJDOE feels the need to throw cash at him anyway.

What's most frightening to me is that Wilson says his plan is to open a "cluster" of charters in Paterson. Paterson is home to 33 elementary schools, and four elementary academies.  Lots of room for Wilson to grab some market share, especially with Cerf and Popoff in his back pocket.

And let's not forget.  The people of Paterson knew NOTHING about this application until after it had been approved. This is being done TO the people of Paterson, not WITH them. And not for nothing, Wilson isn't allowed to operate like this in NYC. There he HAS to notify the public. Wilson is currently applying to open new charters in the Brooklyn neighborhoods of Sunset Park and Flatbush.

Why is this not a part of the process in NJ? How does Cerf get away with approving charters without community input time and time again?

Here's what needs to happen.

The NJDOE needs to release every single document related to how Wilson's charter and grant applications were reviewed, as well as every other application in those application rounds. This is the only way the NJDOE can demonstrate that Wilson was not given a charter school and a $150,000 grant just because he knows Cerf and Popoff. We also need to know who reviewed those applications, how the reviewers were selected, and how the ratings impacted Cerf's final decisions.

Cerf must not be allowed to award a "cluster" of charters in Paterson to his Edison Learning buddy, just as the good people of Paterson and their elected officials struggle to get out from under 21 years of unsuccessful state control. Why should they be subjected to more failed state policies, and why should they have no say in the future of their district? If Wilson gets a foothold in Paterson now, much needed funds will be drained from the Paterson budget just as the district is trying to reestablish local control.

Cerf's learned he can't get away with these shenanigans in suburban districts, and he and Christie have completely backed away from approving charter schools in "high performing" districts.  Help me send this administration a message that they can't get away with it in Paterson either.

This administration refuses to give urban school districts a seat at the table when charter decisions are made. Paterson may just be poised to change that.
Posted by Mother Crusader at 12:08 AM