This is Part Two in a series about the Paterson Collegiate Charter School Application.  Here's the link to Part I.

In Part II we will look at the man behind the Paterson Collegiate Charter School Application; Steven F. Wilson.


Steven F. Wilson, founder and president of Ascend Learning, is also a senior fellow at Education Sector, a Washington think tank, and formerly, the John F. Kennedy School of Government at Harvard. He is the former CEO of Advantage Schools, an urban school management company that enrolled nearly 10,000 students, and a former executive vice president of Edison Schools.

Earlier, Wilson was special assistant for strategic planning for Massachusetts Governor William Weld and co-executive director of the Pioneer Institute, where he wrote the Massachusetts charter school law. He is the author of two books: Learning on the Job: When Business Takes on Public Schools and Reinventing the Schools: A Radical Plan for Boston. He is the board president of Building Excellent Schools, a national training program for aspiring charter school founders, and a graduate of Harvard University.

That's a lot to digest, so let's take this a bit at a time, and let's start at the very beginning of Wilson's career.  Fresh out of Harvard, Wilson landed at the Pioneer Institute, which is a self proclaimed "leader in the charter public school movement" in Massachusetts.  Thankfully, EduShyster, a ridiculously clever Massachusetts education blogger, is on the case and makes regular fodder of the Pioneer Institute and it's current Executive Director.


Special Assistant to the Governor of Massachusetts in 1993. During his tenure Wilson is credited with writing the Massachusetts charter school law.  So what did he do after writing the law? Why, in 1996 he started a for-profit Boston based Charter Management Organization that took advantage of the newly written law!  Of course!!

A 2002 report, The Pioneer Institute: Privatizing The Common Wealth by Political Research Associates, made it pretty darn clear that everything Wilson had done in his career basically set him up to be the perfect guy to start a for-profit charter company in Masschusetts. (from page 10).

Rather, at Pioneer, privatization is alternately an ideological position and a way of opening business opportunities for colleagues and others. An example of the latter is Steven Wilson and Pioneer board member William Edgerly’s foray into the business of charter school management. The creation of their for-profit management company, Advantage Schools, came hard on the heels of Wilson’s drafting of the charter school law and Edgerly’s lobbying efforts for the creation of these schools.

Advantage Schools must have been a huge success for Wilson and his partner, right?

Well, Wilson sure thought so!  By March of 2001, in just five short years, they had opened 15 schools across the country. Wilson boasted to Wall Street that Advantage Schools was thriving and producing results as the nation's largest charter school management company.

The company was founded and incorporated in 1996, and we opened our first two schools in September 1997. Advantage Schools is a K-12 education management company, a for-profit corporation whose mission is to create a new generation of very high-performance public schools, primarily in urban areas. We're seeking to demonstrate that public schools can function at a much higher level. Today, we have 15 schools in operation educating approximately 9,500 students, and some very interesting early academic results that are, I think, exciting.

Gee, sounds like everything was going great, at least according to Wilson!

Yet as Wilson was giving this interview, things were quickly heading south for Advantage.  The stark reality in May 2001 differed significantly from Wilson's rosy depiction just two short months earlier.

Kathy Madigan, Advantage's former head of instruction, says the company's curriculum, created 30 years ago, is excellent. She insists that for-profit companies can do a good job running charter schools. She says that Advantage started with the goal of lifting up failing students, but that financial pressures - and its own arrogance - doomed it to failure.

Advantage figures it needs 30 schools to turn a profit, according to Wilson's testimony in the Mystic Valley dispute. It currently has 15, so it is under pressure to open new ones as quickly as possible, said Madigan, who was assistant dean of the University of Oregon's education school. She quit Advantage 10 months ago, frustrated, and now heads a Boston-based education think tank.

Madigan said she and cofounder Ted Rebarber left because they were frustrated by an increasing emphasis on the bottom line. Rebarber could not be reached for comment, but he is no longer with the company.  (emphasis mine)

Wilson was ousted as CEO of his own company.  Ouch.

New Jersey did not escape unscathed by Advantage and Wilson. Former Christie Commissioner of Education Bret Schundler's Golden Door Charter School had quite a run in with Advantage.


State officials have some concerns, however, about the school's reliance on Advantage, which receives 20 percent of the school's operating budget in exchange for curriculum, training, and some business operations. At one point, teachers were paid directly by Advantage, making it appear as if they were Advantage employees.

That problem has been corrected, but state officials remain concerned that the school spends too much on administration. At one point, the state calculated that the school spent just 33 percent of its budget in the classroom, far less than the minimum 60 percent required by the state. School officials disputed that calculation, saying many of the expenses the state characterized as "administrative" were actually payments to Advantage that accrued to the classroom in the form of staff training and curriculum. The issue remains unresolved.

As for the low scores on the state tests, Schundler and school officials say the students showed marked improvement on other tests published by private companies. The bottom line, he said, is that while the school may not be for everyone, it provides an important option. (emphasis mine)

By July of 2001 Advantage had been taken over by Mosaica Education Inc. and Golden Door's contract with Advantage, like others across the country, was discontinued.

In the wake of Advantage's demise, while a Senior Fellow at Harvard's John F. Kennedy School of Government, Wilson wrote Learning on the Job: When Business Takes On Public Schools, published in 2006.

In Learning on the Job, industry insider Steven Wilson, the founder and CEO of Advantage Schools, looks back on the first tumultuous decade of this social experiment. Digging deep into the academic, financial, logistic, and political records of seven leading EMOs, including his own, he reveals the potential and pitfalls of their business and educational models, and their actual successes in the classrooms and the boardrooms. Have they given their students a better education? Can they succeed as businesses? Can businesses in fact run better public schools than school districts?


My guess is Wilson doesn't have the answers to ANY of these questions. Nonetheless, by the time the book hit the shelves, Wilson had moved on to yet another for-profit learning experience as the Executive Vice-President of Edison Learning, the alma mater of Education Commissioner Chris Cerf.  Having left in April of 2005, Cerf was no longer President and COO of Edison when Wilson arrived, but NJDOE Chief Innovation Officer Evo Popoff started at Edison in 2004 and was at Edison until 2012 when he was hired by Cerf. 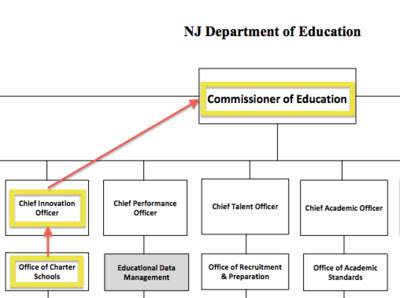 According to the NJDOE Organizational Chart, Popoff is positioned square between the Office of Charter Schools and the Commissioner.  This means the two men deciding the fate of Wilson's application have been swimming in the same small for-profit education pond as Wilson. It seems unlikely that Popoff and Wilson don't know each other since Wilson's entire Edison career overlapped with Popoff's.   That sure seems like it should give Wilson's application a leg up, doesn't it?

Wilson left Edison to found Ascend in 2007, and now six years and four charters later, he is rebuilding his charter empire, this time in Brooklyn.  He has an additional three schools in the pipeline, including the application for Paterson, which will be his first foray across the river.

Wilson has made some significant changes in his approach to the charter business. Most notably, Ascend is set up as a non-profit, where Advantage was for-profit.  Don't let the label fool you though, you can be certain that there will be plenty of money flowing through these charters.  We will talk more about how Ascend plans to make a profit in the next part of our story, but for now let's just say Ascend's 990s show that Wilson is still making out just fine.

In Part III we will look at how Wilson has structured his existing charter chain, and his plans for the Paterson Collegiate Charter School.  I have a lot to share, I hope you'll stick around.
Posted by Mother Crusader at 6:26 PM