Should A Quasi-Private-Elite Hebrew Charter Be Allowed To "Recruit Diversity" In An Apartheid District?

February is here, and that means by the end of the month Commissioner Christopher Cerf will decide whether to allow the Hatikvah International Academy Charter School to add a Middle School to their current K-5 charter, and add an additional class of 25 students per grade. The expansion would allow Hatikvah to double their enrollment.

I have already detailed many of my concerns with Hatikvah's proposed expansion, including the fact that, since opening in 2010, Hatikvah has morphed into a statewide charter school.


And here is the other really interesting thing; East Brunswick is the only district Hatikvah is approved to serve. But I filed an Open Public Records Act (OPRA) request to find out how many districts Hatikvah currently serves.

What did I find out?

That Hatikvah has enrolled students from 20 other districts in 6 counties. This clearly demonstrates that while Hatikvah is only approved to pull students from East Brunswick, in the four years since their approval they have morphed into a statewide charter school. Only 57% of their students come from East Brunswick, the only district they are approved to serve.
And that's not all. I also used OPRA to get access to Hativah's waiting list. Even I was shocked to learn that students from 39 different districts, as far north as Teaneck and as far south as Toms River, have applied to attend Hatikvah.

The statewide nature of this charter is not my only concern.

I am also troubled by the demographic makeup of the charter. Bruce Baker recently wrote an amazing post about the demographics of Princeton Charter School, which he found to be more like Princeton's local private schools than public schools.

Urban charter schools have arguably taken their toll on urban catholic school enrollments, but that’s another story.  But, to the extent that state charter policies permit the type of school establishment and segregation going on in Princeton, more and more parents may find ways to organize quasi-private-elite schools to serve their needs – effectively seeking taxpayer charity to support their country club preferences. This indeed may pose a threat to financially less well endowed private schools.
In a twisted sort of way, it’s rather like asking your local public parks department to pay for your membership to the local private country club – thus reducing the quality of services to others who really don’t have access to the country club (even if it proclaims it’s open to all comers).
Much more to ponder here… but the numbers on Princeton Charter School certainly raise some serious red flags. (emphasis mine)

Well Bruce, I think the numbers at Hatikvah raise some serious red flags, too. I took a page out of his playbook and looked at the state data to compare Hatikvah to their top five sending districts. I added New Brunswick too, for reasons that will become apparent a bit later.

Here's what I found. 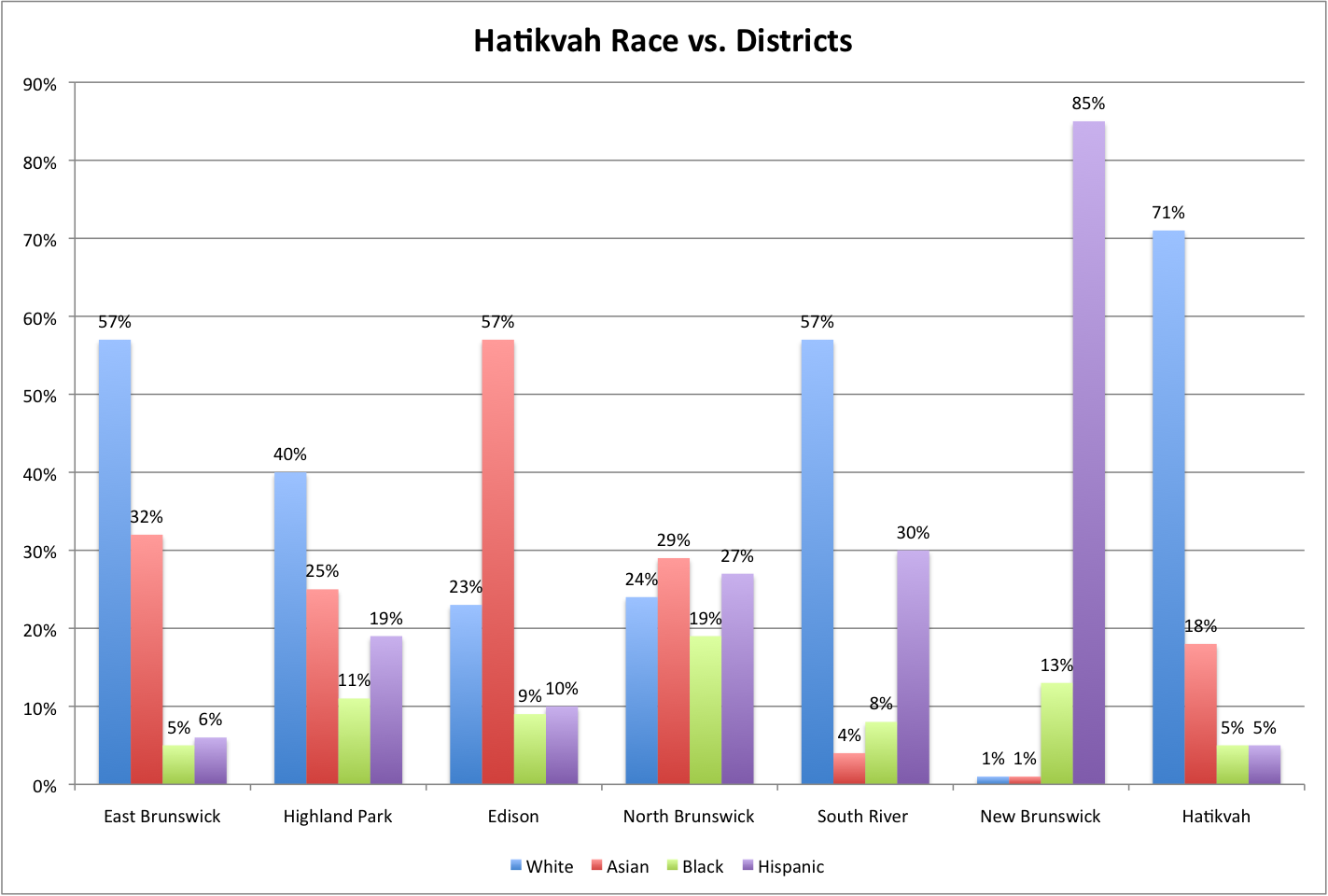 Hard not to notice that Hatikvah has more white and less minority students than any of the sending districts. This finding isn't exactly a surprise for a Hebrew Immersion charter school, right? Hatikvah is part of the Hebrew Charter School Center (HCSC) network, whose
mission claims to be a "network of excellent schools that serve diverse populations of students.”
Just not as diverse as the host districts apparently...

Hatikvah and HLA are the first charter schools to open with assistance from the year-old Hebrew Language Charter School Center, funded by a group of prominent Jewish philanthropists who include Michael Steinhardt and Harold Grinspoon. The center, which last week hired Aaron Listhaus, the chief academic officer of the New York City Department of Education’s Office of Charter Schools, as its executive director, makes no mention of Jewish day schools, or targeted Jewish populations, on its website or in any of its published materials.
Its mission does, however, include supporting a “network of excellent schools that serve diverse populations of students.”
At Brooklyn’s HLA, in an urban district that encompasses poor, middle-class and wealthy neighborhoods, 37 percent of the students are African-American, many of Caribbean descent, and 68 percent qualify for free or reduced school lunches. Of the children assumed to be Jewish, many are the children of Russians and Israelis.
Hatikvah, in suburban Middlesex County, has less class diversity, but a mix of ethnic backgrounds: 40 percent of the student body is non-white, mostly South Asian. While the school is not allowed to ask about religious background, one parent interviewed estimated that roughly one-third to one-half of Hatikvah’s students are Jewish, many of them the children of Israelis. (emphasis mine)

If Hatikvah was 40% non-white when they opened, and are only 29% non-white in 2013, looks like they are becoming more white and less diverse over time, not more.

Let's look at some of the other demographic characteristics of their students, maybe there's some diversity there. 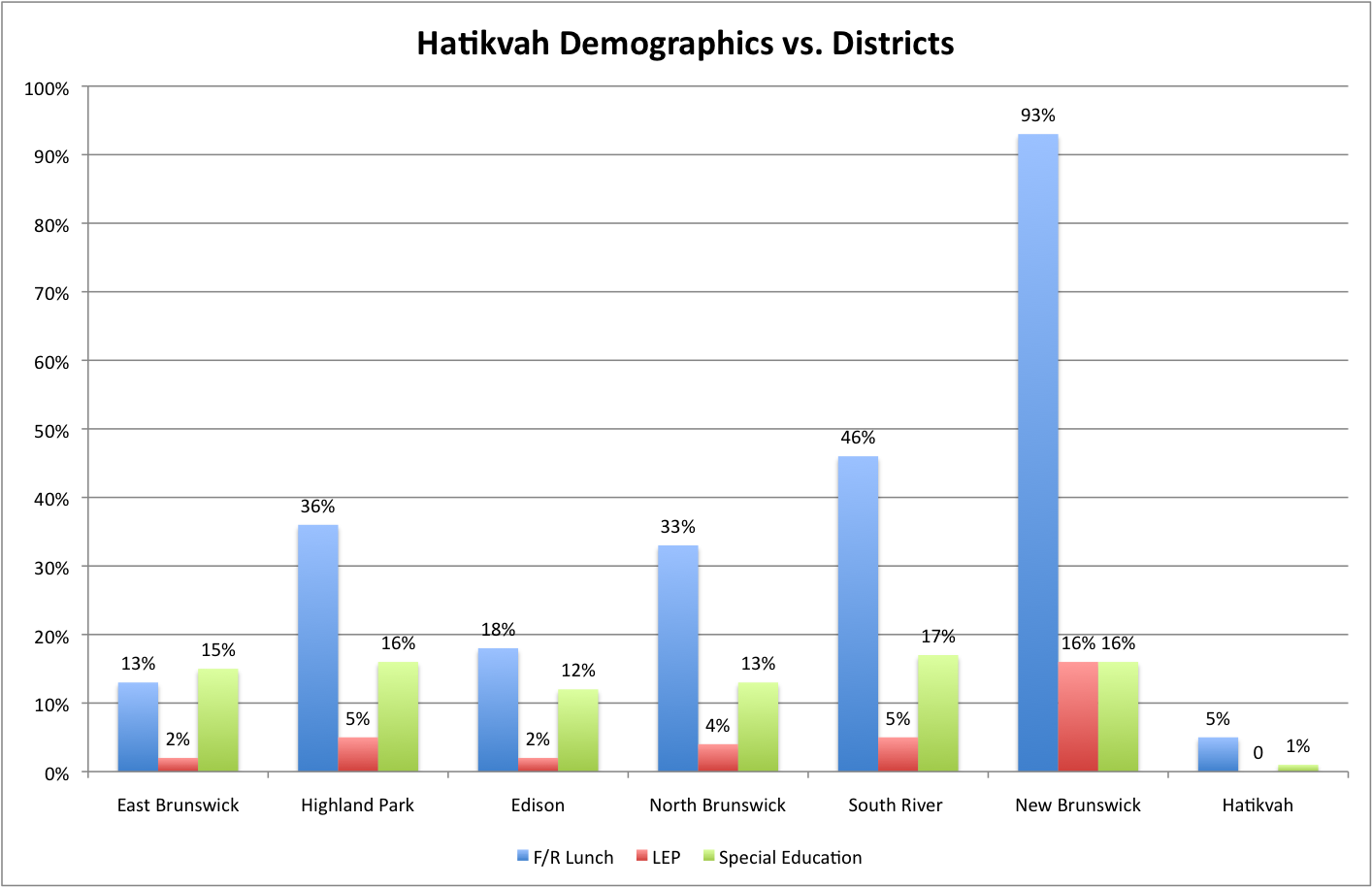 Hatikvah also has less Free/Reduced Lunch, Limited English Proficient, and Special Needs students. In fact, they have a lot less.

So what does this mean?

It brings us back to Bruce's argument, that charters that serve a more affluent, less diverse population are asking the rest of us to fund a "quasi-private-elite school" that suits the needs of a select few.

Hatikvah was recently cited as one of the causal factors in the closure of the East Brunswick Solomon Schechter Jewish Day School.

Kamens blamed the school’s closing on a “perfect storm” of factors, including demographics, a poor economy causing more students to ask for tuition assistance as fund-raising efforts faltered, and competition from other day schools and the Hatikvah International Academy Hebrew-language charter school in East Brunswick.
(emphasis mine)

And not only did Hatikvah contribute to the demise of Solomon Schechter, once it was closed even more Schechter students ended up at Hatikvah.

With only three weeks left until the start of the school year, the majority of parents had already taken their children out of the school and enrolled them elsewhere, mainly East Brunswick Public Schools, Solomon Schechter schools in West Orange and Marlboro and Hatikvah International Academy Charter School, Rabinowitz said.

Seems pretty clear that a lot of what Bruce noted in Princeton is also happening in East Brunswick. Hatikvah appears to be another excellent example of what he describes as "taxpayer charity" that supports a "country club preference."

The additional concern with Hatikvah is that the charter clearly caters not just to a "country club" preference, but to a religious preference as well. More to come on this very soon, stay tuned.

Something else I find troubling about the lack of diversity at Hatikvah is that this "quasi-private-elite school" that bears little resemblance to the districts it serves, uses their standardized test scores to compare themselves to the sending districts. The purpose here seems to be two-fold; to claim superiority over the district schools, and to make the case for their expansion.

This is pulled directly from the Hatikvah Renewal Application, which includes the expansion request.

They just forget to mention that they aren't serving the same population of students.

There does seem to be a dim awareness that Hatikvah isn't meeting the stated mission of the HCSC to "serve a diverse population." In fact, in Hatikvah's 2012-13  annual report they make a very peculiar statement. One that sure got my attention.

Hatikvah plans to "recruit" for "student diversity" and "free/reduced lunch" students in New Brunswick, a district they aren't even approved to serve? (Now you know why I included New Brunswick in the statistics) How exactly does this demonstrate their "recruitment practices are free of discrimination?"  Sounds kind of discriminatory to me to target a specific district in search of poor, minority students.

But it's certainly easier for Hatikvah to find the poor minority students they seem to be looking for in New Brunswick. Afterall, look at the demographics; 93% Free/Reduced Lunch and 98% Black and Hispanic.  New Brunswick Public Schools are just on the cusp of being what Rutgers researcher Paul Tractenberg recently defined as "apartheid schools."

A new Rutgers University report on so-called apartheid schools in New Jersey says that 26 percent of black students and 13 percent of Latino students attend schools where 1 percent or fewer of the students are white.

The study argues that although New Jersey is a wealthy, mostly suburban state with a tradition of strong public schools, its black students face more extreme segregation than blacks in the South, where segregation was long mandated by law. It said another 21 percent of black students and 29 percent of Latino students in New Jersey attend “intensely” segregated schools where 10 percent of the students, or fewer, are white.

It is reasonable to ask whether Hatikvah should be allowed to recruit students in New Brunswick to make their charter appear more diverse, when they seem to be attracting a predominantly white, (Jewish?), affluent student population.

Especially when you consider this statement in their 2011-12 annual report.

Did you catch that?

No lunch program for the Free/Reduced lunch kids, who are entitled to (and the charter receives federal funding for I assume) 10 meals a week?  They only get a "complimentary nutritious entrée" (am I the only one that finds the accent over the é completely insulting and more than a little ironic here?) three times a week from the PTO!

Perhaps now that Hativah is in their shiny new warehouse facility it's possible they have started a lunch program. It's certainly a question I'd be asking if I were the Commissioner of Education and I was considering their expansion. And if they have not started a lunch program, and they are indeed recruiting free/reduced lunch students anyway, well, then I'd have a thing or two to say about that.

What do you think?  Should a statewide charter that seems to attract a predominantly white, affluent student body be allowed to "recruit diversity" in an apartheid school district? Let me know what you think in the comment section below.

If you think this is pretty shady, please consider adding your name to the over 1,100 signatures on the petition asking Commissioner Cerf to deny Hatikvah's expansion.
Posted by Mother Crusader at 12:16 PM